“Now sits expectation in the air” as Shakespeare put it. Never in twenty years as a regular have I seen Mote Hall, Maidstone Leisure Centre as busily buzzy as it was when I arrived for this concert. I’d already queued for 20 minutes to drive into the car park. The hall was, unusually, full to capacity and there were far more under-20s present than Maidstone Symphony orchestra generally attracts. The reason for all this excitement? Sheku Kanneh-Mason. 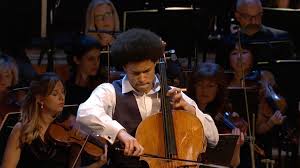 Attractively ordinary with his white shirt, silk waistcoat and fluffy Afro hair the 2016 winner of BBC Young Musician played the Elgar Concerto for the first time. Now 18, and in his first year at the Royal , this charismatic young man, educated at a Nottingham comprehensive school, had me literally crouched on the edge of my seat for the entire concerto.  Seated in the third row, I could hear him breathing the music from the opening, dramatic, sombre E minor chords through to the pained, wistful melodies of the lento and adagio movements and the drama of the final allegro. Has anyone played this concerto with more passion and anguish since Du Pré? It was both riveting and humbling to watch and listen to – and a great privilege to be present at what, I’m sure, will come to be regarded as a historic moment for classical music: the first time Sheku played the greatest, arguably, post-Bach work in the cello repertoire.

Interesting to reflect too that Elgar was 62 when this concerto premiered in 1919. I find it fascinating that every generation can throw up at least one brilliant young musician who can, with stunning technical expertise, climb inside the tortured mind of an elderly gentleman whose beloved wife (she died five and a half months after the premiere) must already have been ill with lung cancer.

Well, the concert was definitely the glittering jewel in the crown of this concert but Maidstone Symphony Orchestra shone in the rest of the programme too. Berlioz’s King Lear overture doesn’t enjoy many outings but, engaging piece as it is, it sang out dramatically on this occasion. Brian Wright ensured that we appreciated the quasi melody Berlioz affords the timpanist (Keith Price) and David Montague’s accomplished oboe work which represents Cordelia – sweet and lyrical amidst all the discordance and busy playing – was a high spot.

After a very long interval – during which Sheku was, with great charm,  unhurriedly signing CDs, posing for photographs with admirers and generally making classical music “cool” – it was time for Dvorak’s New World Symphony. Brian Wright took the whole work at a nippy speed and I don’t think it was just because we were running late. It needs to move to come alive.

He is awfully good at allowing woodwind and brass detail to come through and of course, for irrepressibly exuberant Dvorak that’s even more important than for some other composers. So we got lovely dynamic contrasts in the opening movement, a beautifully played cor anglais (Jane Walker) theme in the largo against well balanced muted strings and a very lilting scherzo which danced along through all its mood swings and key changes. And as for the allegro con fuoco finale, there was certainly lots of pleasing, fiery “fuoco”. The brass section did exceptionally well here and the very fast “folksy” string passages were admirably incisive.