If the brain is the conductor of the orchestral body (sorry – I’ve probably reviewed too many Proms lately) then of course it controls/directs/manages every section of it. So once Alzheimer’s gets into the works then any body function can diminish or fail in consequence – even eyes.

My loved one has been slightly short sighted for most of his adult life and like almost everyone else has needed glasses for long sight since age 45 or so. For some while now he has, like me, opted for varifocals and worn them all the time simply because it’s easier than constantly taking them on and off and then tediously hunting for them. He’s had his current pair for about a year.

Recently he has complained several times that he can no longer see the “small” (ie normal) print in the newspaper. “OK. That, unlike many of your problems, ought to be fixable” said I, reaching for the phone to book him an eye test. And in the interim I dug out the fancy illuminated magnifying glass, Father-in-Law used to use to make life a bit easier between now and new glasses

Golly, what a tiresome business it was at the opticians. We were there for two and a quarter hours and I take this opportunity publicly to thank the very kind staff at Boots Opticians, Beckenham who treated him with cheerful, unpatronsing patience, throughout.  And of course a queue of late running appointments was building up behind us but no one grumbled. People can be heartwarmingly considerate sometimes.

The test itself with the optometrist took twice as long as it should because of his indecisiveness and forgetfulness. He then “failed” the field vision test twice and they had difficulty getting him to sit naturally and look in the right direction so that the technicians could get the measurements right for the new glasses. It throws him ever more and he gets increasingly flustered if people keep asking him questions or issuing instructions, however gently. He tries hard to cooperate, obviously, but I could see him floundering and, thank goodness, so could the staff. The highlight of the otherwise wearisome morning, though, was when MLO suddenly caught my eye and grinned naturally at the absurdity of it all. The technician saw it too and we all laughed.

The upshot of that long session is that we collect new glasses this week and repeat the field vision test – “when he’s fresh” – at the same time.  And we have to go back next month for the dilation test with eye drops. They ran out of time to do this latter procedure last week, besides which I think they could see that he wasn’t going to be able to cope with much more.

Within hours of this lengthy episode at the opticians I read about a new study in Washington, reported in JAMA Opthalmology. Researchers using a non invasive technique, somewhat unsnappily called optical coherence tomography angiography (do they call it OCTA for short?) have collected some evidence which suggests that there are detectable changes in the eyes of pre-clinical Alzheimer’s patients.

There is, in these people, significant thinning in the centre of the retina, many years before memory loss and cognitive decline begins to show. Or as one scientist working on the study put it “Changes in brain cells can be detected in the retina”.  I rest my case: there IS a link between Alzheimer’s and eyes just as with every other organ and function in the body.

Well, if this test had been available 20 years ago it wouldn’t have helped us much to know that once MLO was a septuagenarian, Alzheimer’s would set in fast. But think about it.  In time it could make a difference to others now much younger than us.

At present there is no way of warding Alzheimer’s off other than by making sensible lifestyle choices – and that’s by no means reliable. It’s not like lung cancer or Type 2 diabetes which can be (but are not always) directly associated with smoking and diet.  The only available Alzheimer’s drugs just alleviate worsening symptoms in the very short term. There is no cure, as we were firmly told several times at the time of diagnosis.

If, however, very early detection technology can be developed then maybe – just maybe – drug therapies which can zap or control the disease before it takes hold could follow.  And that’s glimmer of hope for future generations.

Meanwhile I strongly suspect that MLO’s worsening sight problems are Alzheimer’s related. Fortunately he can just go on having ever stronger glasses if he needs them and if I think very hard and apply myself I might remember how to enlarge the font on his elderly Kindle. 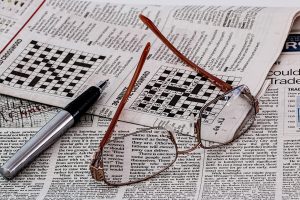