The world’s largest Shakespeare Festival ends this week after 292 performance nights in theatres all over the country. I refer, of course, to Shakespeare Schools Foundation which, every year gets 30,000 or so school students on their feet performing Shakespeare, usually to full houses. This is the 17th festival.

I try to attend at least one performance each year. This time I went, a couple of weeks ago, to Shaw Theatre at Kings Cross to see four schools in action: Harris Academy Battersea with Henry V, Parayhouse School with Romeo and Juliet, St Marylebone CE School with Hamlet and St Stephen’s CE Primary School with Much Ado About Nothing. Quite an evening.

The plays are cut down to about a half an hour running time and it works. Who needs the traitors, the English lesson and stuff about leeks in Henry V ? And in the hands of Parayhouse, a school for children with moderate learning difficulties as well as those with speech, language and communication needs, Romeo and Juliet ran barely 20 minutes. The point is that the story telling is direct and accessible but the language is all Shakespeare’s. The participants are learning huge amounts about Shakespeare and about drama. They are also gaining all sorts of useful transferable skills of which confidence is probably top of the list.

Ruth Brock, SSF Chief Executive, once told me that when she was a primary school teacher she worked with a little girl, of previously limited ambition, whose eyes shone when she said to Ms Brock: “Now I’ve done Shakespeare Schools Festival, I can be a doctor can’t I?” Or, take Yusuf, aged 10, who’s quoted in this year’s programme: “In the future it helps you with a job. If you didn’t do this you may not have the guts.”

However hard we try, there are still plenty of people out there who perceive Shakespeare, or even live theatre, as elitist. “Our survey data shows that nearly half the parents of SSF participants have never been to their local theatre” says Helene Hasse, spokesperson for SSF. As a cultural education charity, SSF is making a splendid job of helping to break that down.

Part of the excitement is the opportunity for children from all sorts of backgrounds and schools to work in a professional theatre for a day. And there’s a lot of gain in four schools being on one programme because they get the chance to mix which is excellent especially for special school pupils who tend, sometimes, to be a bit isolated.

Of course you don’t go to SSF performance nights looking for the next Branagh or Dench. The learning process which gets the young casts to this point is actually far more important than what the audience sees on stage on “the night”. Nonetheless I really enjoyed Lewis Legge’s Benedick. I suspect he’s a natural comic and now that he’s tasted the theatrical drug of hearing laughter I bet he’ll want to do lots more.  And watch out – one day, maybe – for Kelsey Rorison. Her Henry V was surprisingly mature and strong. 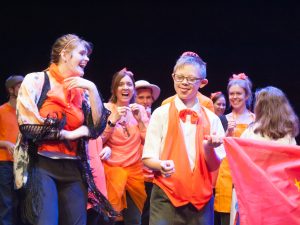