The Man in the White Suit (Susan Elkin reviews)

The Man in the White Suit continues at Wyndham’s Theatre, London until 11 January 2020. 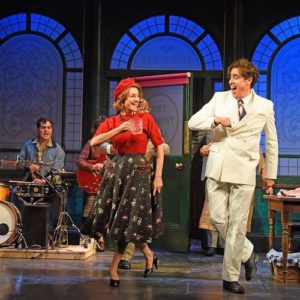 I would have left at the interval had I not been commissioned to write a review. Rarely have I been quite so disappointed in a show which had so much promise. It is quite sad to see such potential and talent so misguidedly squandered.

Based on the 1951 film of the same name, The Man in the White Suit tells the story of Sidney Stratton (Stephen Mangan) who invents an indestructible cloth which will never need cleaning, thereby threatening the entire textile industry.

Now, I usually like a bit of farce but it has to be slick, original and witty. Writer/director Sean Foley’s take on this tale is anything but …

Read the rest of this review at http://musicaltheatrereview.com/the-man-in-the-white-suit-wyndhams-theatre/