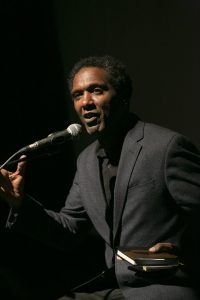 Happy birthday Marlowe Theatre which is, this month, celebrating the first five years in its new venue.

I attended an enjoyably upbeat celebratory gala concert (all proceeds to the new Creative Opportunities fund) there at the weekend. It included samples and representations of work presented in the theatre over the last five years and one simply couldn’t help being struck by the eclectic breadth. We started with the rivetingly charismatic Lemm  Sissay performing one of his own poems and ended with a reprise of part of Stacked!, the hugely ambitious community piece which delighted audiences last summer.

In between we got three young musicians playing classical solos (beautifully) to represent the partnership with the Philharmonia and feature its Emerging Artists scheme alongside the Marlowe’s Young Musician of the Year competition. Then there was a pas-de-deux from Northern Ballet’s Jane Eyre, a vibrant duet from Chicago and Lauren Fagan from Glyndebourne singing Debussy, Mozart and Puccini.  It was my first encounter with Kate Prince’s ZooNation Youth Company’s hip hop theatre and by golly, they’re jaw droppingly good.

Artistes had given their time including Stephen Mulhern and Phil Gallagher who did some good knockabout stuff with regular Marlowe panto (Evolution productions) dame, Ben Roddy The latter, in his dinner suit rather than frock and outrageous hat, hosted the event and it is probably churlish to point out that he seemed to be reading his script without having seen it before and was rather less than professional until he went into joshing mode with Gallagher when it was like a light coming on.

The show looked forward as well as back. The National Theatre is developing and opening its tour of War Horse at the Marlowe next year and it was moving to have a few minutes with Joey and Topthorn. The Marlowe is also looking forward to the Mama Mia tour in 2017 so we got a fine trio as a warm up.

Best of all was the emphasis on participation, learning, youth and community work. Because the Marlowe began again five years ago it was able to put community at the heart of its work from the word go and that approach really shines through. We saw several film clips between acts and heard repeatedly that the Marlowe is changing lives by helping people – of all backgrounds and abilities –  to act, write and get involved. The icing on the cake, for me, was the extract from the RSC’s Dream for the Nation in which Canterbury Players, an amateur company, played the rude mechanicals. It was a real joy to see Lisa Nightingale, the RSC’s first female Bottom, in action again. Nightingale, now 43, trained professionally but failed to get enough work to sustain a career. She would love to go back, she told me afterwards, but still doesn’t have an agent. What’s the matter with them? I have rarely seen an actor more castable. Someone should snap her up – today.

I’ve seen the Marlowe through three venues. I can remember taking my children to the old old Marlowe (where the Marlowe Arcade now stands) in the 1970s, to a panto Wizard of Oz, a Yetties concert and to see Jess Conrad in Joseph and His Amazing Technicolour Dreamcoat. Then came many visits during the 25 years of the new Marlowe, a converted cinema which stood on the same site as the present building.  And I reviewed several shows in the big tent which acted as a part-time temporary theatre during the re-build. It’s quite a story.

The Marlowe now has fourteen of its former trainees working in the theatre industry. 3340 people have taken part in community workshops in the last five years. Over 95,000 saw last year’s pantomime and 1.7 million tickets have been sold for the main house since the re-opening.

Congratulations to all concerned. Here’s to the next five years and beyond.