Well this is Matthew Bourne so you arrive expecting nothing remotely conventional or “traditional” (whatever that means) and you’re right. This riveting show is a ravishing dance piece with the plot of Romeo and Juliet so radically and freely reworked that I doubt Shakespeare himself would recognise it. And it matters not a jot. It’s fresh, original and utterly compelling. 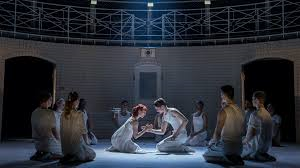 We’re in the Verona Institute in the near future – some sort of care facility for people with mental health problems maybe but more like a prison with officers, bars, keys and locks. Residents (inmates?) are dressed in simple white clothes and of course there isn’t an en pointe shoe or a pair of tights in sight. There are no pointless leaps just because one/some of the male dancers can do spectacular ones either. Instead we get a great deal of muscular ensemble dancing either bare foot or in plimsoll-like footwear. I have no idea how Bourne thinks of these visually vibrant, but often quite simple choral/corps de ballet movements (such as shifting forwards in relentless rhythm) and makes them feel completely fresh.

The other hero of this show is Prokofiev’s score – unusually for Bourne it’s played live in the pit with passion and panache by a nineteen piece band conducted from piano and harmonium by Dan Jackson. It’s extraordinary music. Every single note packs a powerful narrative and Bourne matches it with action so perfectly that within two minutes of curtain up you’ve forgotten that this ballet has ever been done in any other way. It will be a long time before I forget the death of Tybalt (a thuggish guard: Dan Wright) presented here as an act of group throttling, the strap tightened with each of Prokofiev’s dramatic fortissimo minor chords. It’s drama at its spikiest.

Of course every dancer in this company is good. They wouldn’t have been cast in this production if they weren’t. Paris Fitzpatrick and Cordelia Braithwaite as the titular pair of star crossed lovers earn a special mention however. As individuals, often troubled, anxious or cross, they present believable characters, As a pair, in what is effectively their marriage consummation pas-de-deux, they roll over each other and use a series of very ingenious wrap round movements which fit the music perfectly. It’s a skilfully enacted symbolic representation of their physical union and I found it deeply moving.