Prokofiev’s lush score – with all its minor key melody and those evocative rhythms – dates from 1946 and part of it was written during World War II. Matthew Bourne’s idea of setting it in the London Blitz therefore makes sense, and the “Ball” in the Café de Paris – which was bombed on 8 March, 1941 – is beautiful, poignant and apt. And there are some lovely conceits, such as Cinderella (Ashley Shaw in the performance I saw) being whisked off to the dance by her angel (Liam Mower) on a white motorbike and sidecar. There’s a cinema framing device with lots of Pathe news footage too which works a treat. 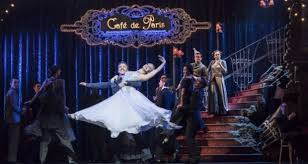 This production, which has been around for a while, is currently touring nationwide and Matthew Bourne did a post-show question and answer session for the first night Canterbury audience.

Shaw first appears as Cinderella, drab in grey and bespectacled at home with Alan Vincent, her wheelchair-bound father. Given that this character doesn’t dance other than with his arms it might have been appropriate to cast a wheelchair user which Vincent isn’t – an opportunity missed?

She is bullied by a stepmother (Anjali Mehra – strong) and a chorus of individually characterised step-siblings, each of them good value in the way they convey greasy nastiness. Then, of course, she is whizzed off the glitzy Café de Paris, despite having been denied her invitation, in glittering white. Cue for some lovely muscular dancing by the men and, then for some very engaging duet work between Cinderella and her “prince”, Harry the Pilot who is styled to look like John Cleese but who dances with verve.

Like all the best ballet performances it’s an ensemble piece. The real star is Bourne’s spiky, fluid, story-telling choreography. There is no point work so the dancing feels very natural –  effectively a movement based, Brechtian drama. There’s a splendid scene, for example, when Cinderella is in hospital and her family visit – moving as one round the screens which form doors, pecking menacingly like a flock of vultures. The tiny visual subplot in which a pair of gay men fall for each other is nice too.

The second (but not by much) best thing in this show are Lez Brotherston’s stunning designs for sets and costumes. Most of the clothes are black, white and grey with filmy, flowing 1940s dresses for the women and various sorts of uniform for the men.  He provides a spacious family room at the beginning, a very convincing café de Paris amongst bombed buildings followed by shocking devastation at the end of Act 2. And we even get Paddington station and a rather good train.

This is the sort of show which could, I think attract new audiences to dance productions. Without a tutu or pair of tights in sight it feels much more like a moving piece of musical theatre than a “classical” ballet. Bravo!