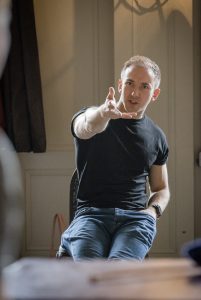 Last week I went to Balham – a bit of an adventure in itself because it’s an area of London I don’t know at all. My purpose was to visit Theatre N16 (yes – a bit confusing in Balham which SW12) where Adam Stadius was leading a week’s intensive training on Stanford Meisner.

This is the work of Both Feet a company which provides Meisner-based training for professional actors. I found Stadius, three days into the five day course, working with seven actors. A mixed bunch, they had trained in various schools including Mountview, East 25 and ArtsEd and some were still in full-time training. Several of them knew Stadius, who is now Head of Acting and Musical Theatre at SLP College in Leeds, from his teaching in many posts including the BRIT School.

It was a fascinating 90 minutes. Working in pairs – and swapping in and out at Stadius’s direction –  the students were working on repetition techniques which involves very concentrated focus on, and listening to, the other actor. Then there’s time for open-minded reflection on where the work has taken you in terms of you own feelings as an actor. Despite this being “only” an exercise it was powerful and dramatic to watch because the energy was so palpable. Then they moved on to a different sort of pair work in which one actor enters the room with an undisclosed purpose to find the other in some sort of distress. Again, it was surprisingly watchable because everything in Meisner training is about truthfulness and that’s the essence of convincing acting.

Steph Upsall and Adam Stadius run Both Feet because they are passionate about the Meisner technique and it speaks volumes for the effectiveness of what they do that students return repeatedly in search of top up training. And of course, it isn’t all in Balham, nice as the Theatre N16 rooms are.