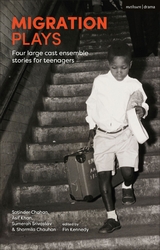 Two interesting new theatre-related titles have arrived on my desk from Methuen Drama (part of Bloomsbury) – both relevant to youth theatre and people who work with young people.

Migration is relevant to millions of teenagers. If they don’t have direct experience of it, many of their parents and grandparents have – it’s central to the lives of huge numbers of families and in many cases it’s very recent and raw. Drama is, as ever, offers a way of processing and understanding the issues for those who have no migration background as well as those who do.

The four plays in this volume were all part of a Tamasha schools project, led by Finn Kennedy, editor of this book. In each case 25 students from Years 7 to 10 (in schools in Derby and London) work-shopped their feelings about  migration before four commissioned playwrights – Sharmila Chauhan, Satinder Chohan, Asif Khan and Sumerah Srivastav –  fashioned the material into performable plays.

Now these are available for performance by large teenage casts in schools, youth theatres and elsewhere. Potato Moon by Satinder Chohan, for example, movingly and lyrically explores the relationship between Indian and Pakistani immigrants in West London and the potato, whose history is also migratory which they often grow on tiny allotments. At the same time one girl dreams of migrating to the moon.

The book also includes some of the exercises which were used in the workshops leading to the development of these plays.

Workshops and exercises are of course, key to any form of devised theatre and A Beginner’s Guide to Devising Theatre by Jess Thorpe and Tashi Gore offers lots of practical ideas. Based on the work and experiences of the award-winning young people’s performing company Junction 25, the book leads the reader through the entire process from idea to stage.

We start with a rationale for devising theatre at all – primarily it’s a way of giving every individual a voice – before moving on to ways of establishing the all-important group dynamic and then selecting a topic to focus on. Then there’s very accessible practical advice about how to make the work, reflect on it and – ultimately – stage it. Part three consists of interviews with experienced theatre devisers.

I find the layout and format of this book a bit clunky – arguably too many text boxes, big fonts and, as it were, introductions to introductions. That doesn’t detract from its value, though. Devising and collaboration are probably the future of theatre so a practical account of ways of managing the process from scratch is timely.