Much Ado About Nothing (Susan Elkin reviews) 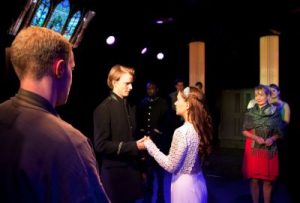 Part of Refashioned season at Selfridges

Caroline Langrishe is a pleasure to watch as Leonata in this pared down, reordered 90-minute Much Ado About Nothing. Every inch a strong woman, Langrishe portrays an authoritative head of her household when she needs to be but in other moods her Leonata is quite capable of girly laughter behind the scenes. It’s a neat feminist take on Leonato, usually played by a man as Leonato.

The famous sparring scenes between Daniel Boyd’s charismatically funny Benedick and Alison McDonnell’s Scottish, angry, sad but witty Beatrice work pretty well too. Director Mark Lepacher makes sure that everyone, except the two of them, knows they’re in love from the outset – and that doesn’t always come through in productions of this play.

There are two main plot strands in Much Ado. There’s the setting up of Hero (Lowri Izzard – nice debut) as a loose woman who is therefore jilted at the altar by Claudio (Harvey Lister Smith – boyish and he does distress well) alongside the getting together of Beatrice and Benedick. This production, set in the present, balances the two well enough but the malevolence of Don Jon doesn’t make sense in a modern setting. Simply being the bastard brother and therefore evil doesn’t feel truthful in 2016.

In principle it’s a good idea to use great actors (Meera Syal, Simon Callow and Rufus Hound) as news reporters and commentators on over stage TV screens. But if you don’t (can’t?) synch the sound track then it’s best not to do it. In the event this is the weakest part of this production and makes it feel very amateurish. It’s a shameful waste of the talents of the actors concerned and I should think they’ll be horrified if they get along to Selfridges to see the show.

The temporary space on Selfridges lower ground floor is a thoughtfully designed traverse playing space with 122 seats and it is an interesting idea for a Shakespeare festival, I suppose, although I can’t help wondering quite what it’s setting out to achieve other than publicising an already famous department store.