“We are the music makers”

Last Saturday I pushed, shoved, forced My Loved One a million miles out of his comfort zone. “Sod you, Ms Alzheimer’s” I said to our horrible predatory visitor and took her victim to a singing day in Folkestone.

Some background: I have been almost continually involved in some form of amateur music making since I first warbled in the infants’ school choir at age 5. In contrast, MLO, although a lifelong music lover (mostly a “classical” chap), hasn’t been a participant since he confronted his hitherto suppressed atheistic misgivings and left the church choir at age 16. So it was 55 years since he last sang with others and, of course, he doesn’t read music.

The singing day in question is an annual Gilbert and Sullivan (and we both love G&S) event run by someone I know through the huge and informal Kent music making network. It’s the usual deal – rehearse during the day with local soloists, then sing it all to an audience in the evening. Using the Tower Theatre in Folkestone, it routinely raises several hundred pounds for charity.

I’d asked the organiser/Musical Director in advance to seat MLO next to someone “strong” in the basses. The upshot was that as soon as we arrived we were introduced to a delightful father and son – the older man is an organist and retired clergyman. They looked after MLO all day with heartwarming kindness, helping him to keep his place in the score and to stick the post-its I’d given him in useful places. The programme was Trial by Jury – which MLO knows well by ear – and extracts from Utopia Limited which he doesn’t but neither did anyone else so it didn’t matter. Most important of all, MLO had to chat to people he’d only just met and that is vital. Reclusiveness is just an open invitation to Ms A to do her worst because it creates a vacuum for her to move into. And his new friends gently involved him in conversation in such a way that MLO was able to acquit himself with dignity.

He was, however, excruciatingly nervous. At lunch time he told me that was going to opt out of the concert in the evening and sit in the audience. Then during the afternoon a little miracle happened. Suddenly MLO seemed to “get it” and was able to start singing a bit and enjoying himself. From my place in the altos, further along the same row I could actually see the change taking place. By 7pm he was looking lovely in his DJ and ready for off. “Lively” might be a bit of an exaggeration but there was definitely a sense that I had got nine tenths of my husband back – on temporary loan from Ms A, as it were.

The concert was fun. I haven’t sung Trial by Jury for ages and Utopia was quite an adventure. At the end MLO’s eyes were shining – yes, shining. He’d taken part in an event with others and had a good time. He talked about it animatedly for most of the drive home to London too. He was on a high and Ms A was definitely absent and I managed not to feel sad or angry for several hours.

That’s what music making does of course. Those of us who do it regularly and/or often know that the satisfaction of having done whatever it is, is a very heady drug. Taking MLO to this event was an experiment. I couldn’t, as it turned out, be more pleased with the result. He’s already looking forward to HMS Pinafore at Folkestone next March and I shall find other similar things for him (and me) between now and then. Apart from anything else, there’s a lot to be said, at this stage in proceedings for something we can enjoy together. 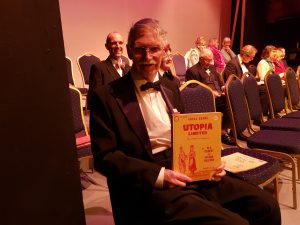