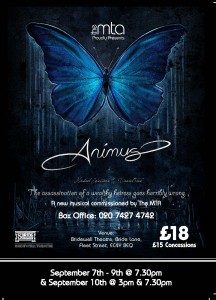 We’re in 18th century London. In a quasi revenge tragedy, heiress Charlotte Donne (Jenna Innes) seeks vengeance, but her judgement is not sound and she makes several (literally) fatal mistakes. It’s a colourful, atmospheric show with hints of The Beggar’s Opera and, from a different century, Les Misérables and Oliver! There are brothel scenes as theatrically thrilling as anything in Measure For Measure and more murders and bodies than in Hamlet. The plot is pretty complicated, but it’s so full of unexpected twists that somehow you sail along with it.

Read the rest of this review http://musicaltheatrereview.com/musical-theatre-academy-animus/