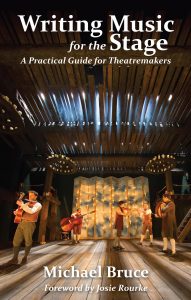 Writing Music for the Stage by Michael Bruce (Nick Hern Books) claims to be a “practical guide for theatre makers” so it takes the reader through the entire process. Plays are often brought to life by supportively atmospheric music written for new productions and Bruce has written scores for, among others, The Recruiting Officer, Coriolanus, Privacy, The Winslow Boy, Noises Off and Strange Interlude all of which feature in his book as case studies. The variety is huge and the work eclectic so there’s plenty of detailed practical advice here for you wherever you are in your learning journey. It’s also a good read for anyone who simply wants to understand how theatrical music works without necessarily wanting to create it. The book also points the reader to online extracts from Bruce’s scores.

New collections of audition speeches are always very welcome. Applicants to drama school, for example, are usually advised to play to type but that doesn’t stop many young actors making disastrous choices. New Monologues for Women (Bloomsbury) is edited by Geoff Colman, head of acting at Royal Central School of Speech and Drama so his advice is clearly well worth heeding. Colman has also edited a similar book of monologues for men, Then there’s a pair of new books from Bloomsbury both edited by Simeilia Hodge-Dallaway. The title Audition Speeches for Black, South Asian and Middle Eastern Actors: Monologues for Women is less than snappy but at least it’s clear and the material is very useful. The companion volume provides monologues for men. There can also be a problem if you’re far too young to play, say, King (or Queen) Lear or one of Alan Bennett’s feisty older women. A warm welcome then to Anthony Banks’s National Connections Monologues: Speeches for Young Actors. (Bloomsbury) Everything in the book comes from plays commissioned for young ensembles through NT Connections during the last 21 years.

Sticking with youth for a minute, Bloomsbury continues to build its excellent GCSE drama series with a student edition of Blood Brothers by Willy Russell and GCSE student guide to Sheila Delaney’s A Taste of Honey by Katie Whittaker. Young people are writing well too. The Wicked Young Writer Awards 2016 were announced last month. The shortlisted stories and poems by writers aged from 5-15 – some of them very good indeed – are privately published in a book Wicked Young Writers Awards 2016 Finalist Entries. Digital copies are available from chris.warner@theartslink.co.uk

And finally, should you cut it? And if you do how are you going to do it and how are others doing it? Shakespeare is widely abridged and reworked in modern theatre. When, for instance, did you last see a Twelfth Night which opened with Orsino languidly enjoying his music? Shakespeare Cut by Bruce R Smith (Oxford) examines contemporary practices including video games, book sculptures and YouTube postings as well as what happens to Shakespeare’s texts in the theatre. He is also interesting on the history of the “cut” trend, right back to Shakespeare’s own time.