No Lie They Fly (Daft Essays no 4) 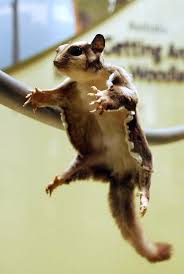 Most birds fly. So do insects and bats. But did you know that some squirrels, lizards,  frogs  and snakes have also taken to the air?

Remember Dumbo the flying elephant? And we all know about all those wonderful things which might happen when pigs fly. Well, take a stroll in the jungles of Borneo next time you’re passing that way.  You won’t – unless you’ve had a drop too much of the local date brandy or palm wine  –  see pigs and elephants defying gravity  but you could well see a squirrel gliding thought the air.

The aeronautical squirrel – address him as Petauristinae if you’re feeling formal – lives with his mate in a hole high up  in some tall tropical tree. He’s a handsome guy wearing a rich russet fur coat which looks as if was bought for a bigger chap.  In the late afternoon he and his wife scamper out for a bit of exercise – running along the bark  using their needle sharp claws like rock climbers’ pitons.

Then they begin to circle the tree trunk frenetically, Suddenly and quite unexpectedly the pair of them take off, first one and then the other  like a two part squadron.  Together they glide effortlessly and silently up to 35 yards through the air toward the next tree.  During the flight all four limbs are stretched out tightly and  the baggy overcoat  reveals itself as a useful  flat membrane attached at  wrist and ankle.

They  have evolved  fairly  light bones and  their ‘flight’ is a way  of moving from tree to tree in a dark  forest hundreds of feet below the leafy canopy  where the long trunks are  straight and lower branches are few and far between.   It’s really more  of a supported  jump – similar to hang gliding – than to true flight.

The aerodynamics are effective The fat furry tail is  a good rudder. So steering looks after itself. Once Mr and Mrs Squirrel are  within striking distance of the landing stage they  swoop sharply  upwards. Thus they hit the trunk running and can gallop away into the forest canopy  like aircraft touching down on  a vertical  runway.

In the same forest you might chance on Draco, the flying lizard. His hang-gliding mechanism consists of a couple of neat  of flaps  of skin which  stick out from either flank, furled in like roller blinds against his body. They are stiffened  by  bony rib extensions evolved for the purpose.

When he gets the flying urge he pulls his ribs forward. That yanks the ribs apart and  distends the flaps like and aircraft swivelling its wing flaps. Take-off sends Draco  gliding cheerfully from liana to liana and from branch to branch. From underneath the flying flaps  look like huge diaphanous insect wings.  It’s a lot quicker – and safer because most predators can’t get at you if you’re air-borne – than landing  on the forest  floor and skittering across  to another tree.

Keep an eye 0ut for flying frogs too. Not many frogs have parachutes on their feet but Rhacophorus does.  Extra long toes mean that the webbing he generally uses for fast swimming has evolved to be  much larger than that of his common-or-garden froggy cousins.

When he leaps  he can cover considerable  distances  because his mega-webbing keeps him air-borne.  It means that  he can get from leaf to leaf without putting himself  at risk or using too much energy as he goes about his amphibian  business in the tropical forests of Borneo.

Chrysopelea, the flying snake,  is such a strange beast that for a long time no one believed in him. He was dismissed as a delusion invented by over enthusiastic early  explorers. But he’s real enough.

He’s a small, thin, quietish sort of serpent, although very beautiful with greenish- blue scales flecked with gold and red. Most of the time he whizzes skilfully  up and down vertical tree trunks at top speed.

When he fancies  piloting  himself across to another tree for a change of scenery  he races along a branch and throws himself off.  In the air he flattens his body like a piece of  ribbon which catches the air and enables  it to travel  much further than if it just fell.  The physics are neatly evolved because  most snakes’  bodies are cylindrically rounded.  In ‘flight’ or glide the snake wriggles his  flat length into a series of curly coils which gives him a bit of control  over direction and landing site.