The Nutcracker and I (Susan Elkin reviews)

Presented here as part of London Piano Festival at King’s Place, The Nutcracker and I is effectively a piano recital with attached ballet, both actual and projected. It’s an enticingly imaginative concept and a real joy to see/hear some of the most sublimely colourful music ever written uncompromisingly introduced to a new generation of (very) tiny future ballet lovers. 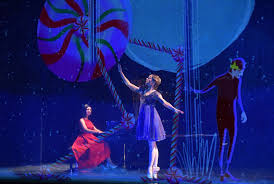 The music, played with passion and drama by Alexandra Dariescu  on a concert grand, consists of fifteen piano transcriptions by composers as varied as Mikhail Pletnev, Stepan Esipoff, Percy Grainger and Gavin Sutherland. All manage to connote the original orchestration pretty fully and pack in a lot of notes, the challenge of which Dariescu rises to with warmth and aplomb.

The action is projected onto a downstage gauze screen with delightfully sympathetic animation by Yeast Culture. Their blue Trepak dancers are really fluid, their nutcracker prince lithe and their mice witty without becoming Disney-like. The only live dancer, Desiree Ballantyne, communicates and dances with them all, just as Dariescu, who plays from memory in half light, makes smiling eye contact and keeps pretty well in time with the dancers. It requires quite special skill to relate and react convincingly to something the audience can see but you can’t  (think Dick Van Dyke and the penguins in Mary Poppins) and both performers bring it off effectively.

What I liked most about this 50 minute show was the lack of dumbing down. It’s simply music and movement with several quite long passages of piano only. There are no words or explanations but it works. Most of the children in the audience were engaged throughout.

Dariescu over-lards the Waltz of the Flowers for my taste and, for narrative cohesion, I’d prefer to return to Clara’s house as she wakes from her dream at the end in the usual way, instead of the rather untidy, unclear ending we get here but these are only quibbles. Generally I loved it and hope Dariescu might be planning similar versions of other ballets.

This show is touring worldwide this autumn and early in 2019. There are some further UK dates in December.