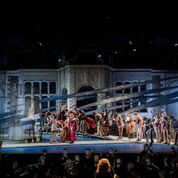 This concise, passionate piece comes with echoes of both Chekhov and Ibsen – somewhere between The Seagull and A Doll’s House. Based on a mid-nineteenth century Russian play and inspired by Janacek’s late flowering love for a much younger woman, it is written with mature, if not always subtle, musical skill – that fortissimo timpani roll at the moment of sexual ecstasy for instance –  and, in this production, conductor Sian Edwards ensures that every nuance is brought out.

As always at Opera Holland Park the playing area is so wide that it’s almost transverse theatre except that the audience is all on one side. Designer Yannis Thavoris has used it pragmatically, with a pseudo river, complete with the ubiquitous reeds, winding across the space and a semi circular mini stage to represent indoors in various forms – I won’t dwell on the fact that in its first incarnation the latter reminded me of a trampoline guard. It was effective thereafter. 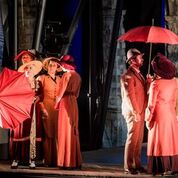 Kat’a (Julia Sporsen) is a married woman with an unexciting husband (Nicky Spence) and an appalling mother-in-law (Anne Mason). In her husband’s absence she falls in love with Boris (Peter Hoare) and of course – this is opera – it can’t end happily.

Sporsen and Hoare work pleasingly together and each brings out the raw longing, regret, guilt and all the rest of it with some impressive solo singing and duet work. The symbolic flying movement as they lift all four of their arms to create a sense of togetherness (with a nod at the old slang implications of “flying”) underpins the singing rather cleverly too. Amongst the supporting roles Paul Curievici as Kudrjas stands out as does Clare Presland’s Varvara.

The chorus is a strange beast in this production though. The score gives them very little singing but, since they have to be in the building, director Oliver Fuchs uses them a lot in other ways to provide a sense of bustling crowd scenes, people walking by the river or observing the action. The trouble is that there are 32 of them and the lay out of OHP’s stage means that it takes a long time to get that number of people on and into position for what are often very short scenes – the whole laborious concept is far too fussy. Full marks, thought, for their beautiful, elegant Downton Abbey-esque costumes – in brown, terracotta, amber, burgundy and orange; like warm old bricks.

Kat’a Kabanova doesn’t  seem to get as many outings these days as Cunning Little Vixen or Jenufa and that’s a pity because it’s an interesting piece worth exploring. Well done Opera Holland Park for the usual imaginative programming.