This horrible, hideous, hair-raising story is nearly over.

Last Wednesday I was called into the hospital at 2.30am. I got there in 15 minutes from the moment I picked up the phone. Our two sons joined me an hour or two later. We listened at My Loved One’s bedside, tense and on tenterhooks, to ragged breathing with some longish pauses between breaths through the quiet of the night until, eventually, dawn broke over Ladywell. Various medical people came in to do checks during the long night. Once it was fully light MLO opened his eyes and then, after a while, drank a few sips of water and we realised that he was rallying – a little – and that he would probably linger for a bit longer.

Five days later and that’s still the case except that we’re now firmly and definitely in palliative care. The consultant came to see us on Wednesday and we all four of us agreed no more medical intervention (including medication, cannula and rehydration drip) or observation.  Instead they will keep him comfortable and pain free and there’s an open prescription for three “comfort” medications, including morphine, should be need it. She offered us the services of a priest and asked if there were other family members we wanted to bring in.

There is, now, no question of discharging him home. He is simply to stay where he is, in a comfy pressure mattress bed with a view over the leafy Ladywell Fields, for as long as it takes. Given that MLO now refuses more than a few drops of water I don’t see how that can be long. I  go to bed, desperately tired every night but unable to settle because I know as well as anyone that the most likely time for another phone call is 2.00 to 4.00 am when the body is at its lowest point in the twenty four hour cycle. Instead of sleeping I tend to lie there thinking and waiting.

Meanwhile MLO is sometimes awake during the day. Occasionally he murmurs at me but it’s not comprehensible and I’m not convinced he recognises me any more.

Strange though, how even when you’re trying the survive the most stressful thing which is ever likely to happen to you – death, or imminent death, of spouse – there are still things to chuckle at.

One day early last week an enthusiastic nurse radically pruned MLO’s moustache because she said it was in the way of spoon feeding him. The next one didn’t recognise the remnants as a moustache and shaved it off completely. Well, he’s had that moustache since 1970 and his children have never seen him without it but I decided that, in the scheme of things, it really doesn’t matter and said so.

“I am not upset. Don’t worry about it” I said to two (other) nurses whom I’ve got to know quite well. “Well we are!” they said and between them, created a notice to make sure it doesn’t happen again. They were afraid that some staff with limited English might not know what a moustache is so they found and printed off an illustration to pin behind his bed. And it makes me smile every time I look at it,

I can’t say too often how impressed I am by the quality of the faultlessly kind, genuine, friendly care MLO (and I) is/are getting from the staff of Ash Ward at Lewisham Hospital. The moustache saga is just a tiny example. On the morning that we made the palliative care decision one lovely woman,  always warm and thoughtful, came to “our” bedside and said “Listen, we’re here for you guys as well as for the patient. Don’t forget that”. They deserve ten stars, never mind five.

As for me I’m locked in a curious limbo world. It feels as if a train is hurtling towards me relentlessly but in slow motion. Like Olive Oyl in all those old Popeye cartoons, I’m tied to the track. She was always rescued at the very last minute. I shan’t be.

Even now – and I’ve written over 100,000 words on this subject in these blogs –  I sometimes struggle to get my head round the enormity of what’s happening to me. 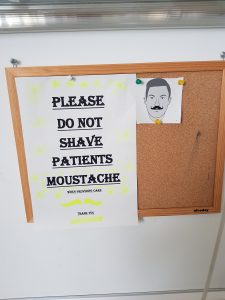