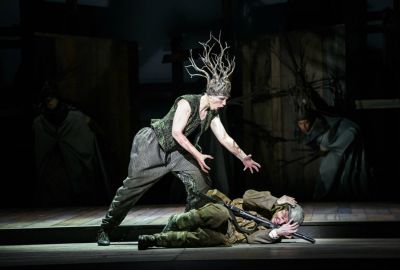 The anniversary of the beginning of the Battle of the Somme was a poignant day on which to experience this powerful opera based on David Jones’s epic World War One book-length poem. Iain Bell’s lush lyrical score is melodious but, a

part from one or two set pieces, stops short of being tuneful. Instead, with hints of Britten, it evokes atmosphere and emotion. The colourful use of instruments adds a lot to the drama and it’s all in excellent hands under Carlo Rizzi with Welsh National Opera Orchestra in the pit.

Apart from two quasi narrators The Bard of Britannia (Alexandra Deshorties) and the Bard of Germania (Peter Coleman-Wright) and Andrew Bidlack as Private John Ball this is very much an ensemble piece. Baritone, Coleman-Wright brings terrific weight and gravitas to his role, Deshorties is gentle and moving as a mourner and exciting when she morphs into the Queen of the Wood dispensing death with random ruthlessness, Bidlack’s role epitomises the ordinary scared, chirpy Tommy – most definitely not a professional soldier and very much an everyman conscript. Bidlack makes him very moving.

WNO has invested in a magnificently large chorus for this production. When the men are marching they are convincing partly because of the size of the group. Their ensemble singing is impressive too. There is also a large chorus of women who

float in and out of the action but are not part of it. Symbolically, I presume, they represent mourning, lament and everything the men have lost although I overhead one audience member commenting in the interval that she didn’t understand what the women were for because everyone knows they weren’t there. In places it certainly takes a leap of imagination to make sense of what seems to be happening.

Full marks, though to designer Robert Innes Hopkins. His extraordinary set encloses the action in an oval space within the large ROH stage. Lowering and raising a semi screen in faux bronze with a grandiloquent inscription creates a huge elliptical expanse of sky on the back wall. This is flushed red for blood, grey for storm, black for night and at one point sports a lovely rising moon. There is also a neat transformation into an underground trench. And the costumes for the women when they morph into sinister twiggy bits of Mametz wood are a real tour de force.

It’s a compelling and very original piece of theatre. It was hard to see in theory, how In Parenthesis could be adapted into an opera. Librettists David Antrobus and Emma Jenkins have provided a fine way of working it and director David Pountney has more than developed it into something theatrically resonant.