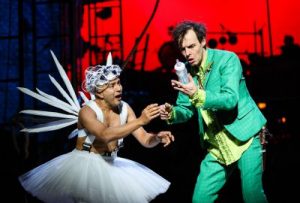 As soon as you see the trademark ladders and gantries you know you’re in a Sally Cookson show and that plenty of theatrical surprises are in store. And this is Peter Pan as you’ve never seen it before. We start with an adult Wendy (Madeleine Worrall – a delightful blend of feistiness but naivety) remembering. Then when the children eventually get to Neverland the Olivier’s vast stage becomes a huge playground not unlike the skateboard park just along the South Bank outside. There’s a whiff of Cats too as everything in the action is contrived from rubbish and debris with the corrugated iron crocodile being a tour de force. The stage is full of bungey ropes for the flying, counterbalanced by experts shinning up and down ladders at the sides of the stage and there’s interesting use of the revolve and its undercarriage – it’s a technically complex show and the emphasis is on playing and make believe.

This is a serious Peter Pan, though, and a very long way from the pantomime versions playing up and down the country at this time of year. Cookson makes us think about issues such loss, bereavement and above all, motherhood. Anna Francolini (a late replacement for Sophie Thompson who was injured in rehearsal and had to withdraw) doubles Mrs Darling and Captain Hook which makes the villain seem both more sinister and more troubled and troubling than usual. What on earth could this woman’s back story be? Francolini – silver teeth glinting and sporting a huge hook – makes it clear that hers is is a fractured, damaged, vulnerable personality beneath the bravado and her final succumbing to the predatory crocodile is almost as arresting as Cleopatra and the asp, lightened only by a reptilian burp.

Paul Hilton’s Peter is a green glad spiv, reminiscent of a young Michael Sheen. He is, by turns, petulant, needy, bossy, rueful, playful, affectionate and there’s a witty scene in which it all gets too much for him and he literally throws toys out of a pram. It’s a fine performance. Other noteworthy work includes Ekow Quartey doubling Nana the dog and the desperately needy Tootles and Felix Hayes as an entertainingly childish Mr Darling.

This Peter Pan is conceived, as usual with Sally Cookson directing, as an ensemble piece and there’s very slick, impressive work from everyone in the cast whether they’re being windows, pirates, mermaids or many other things. At one point they are all playing musical instruments along with the band which pounds expertly along at the back throughout the Neverland scenes.

There are several wow moments of which the best is the point at which Peter and the children set off for Neverland and pass glowing planets, clouds and more. It provides a real sense of magical transition.

It wouldn’t be everyone’s cup of tea – although all the key elements of the story are firmly present – but this is the most thought-provoking Peter Pan I’ve seen since the 2015 Open Air Theatre Regent’s Park version made us think about how most of JM Barrie’s boys would have been maimed or killed in the war only a few years later. Here Wendy hesitates when, years later, Peter asks her where John and Michael are.