Part of the Philharmonia’s now established – and very welcome – annual residency at the Marlowe, this concert packed a lot of variety.

We began with a workmanlike account of Beethoven’s 1810 overture Egmont. I liked Paavo Jarvi’s elegantly pointed dynamics and the seating arrangement with second violins to the conductor’s right meant that none of the complementary melodic elements were lost. Jarvi’s conducting style here was a bit odd, though. In places he was busily signing every semi-quaver. It must be very tiring.

Viktoria Mullova is a very charismatic performer. Tall, sinewy and oozing musicality she gave us a Sibelius violin concerto which was spirited without being showy, especially in the third movement with its nearly executed double stopping passage. It’s a pity this concerto, which dates from 1904, doesn’t get played more often. I can only suppose that it owes its relative unpopularity to its failure to create an audible Finnish landscape, unlike the symphonies and overtures.  After the concerto, Mullova pulled up a music stand and, accompanied by the orchestra, played Arvo Part’s Passacaglia as her encore – technically fiendish as well as good fun. 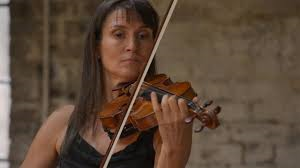 But the highlight of the concert came after the interval in one of the best performances of Tchaikovsky’s 6th symphony I have ever heard. Jarvi brought out every ounce of drama, colour and tension from the electrifying bassoon solo at the beginning to that extraordinarily soulful final bar dying away to silence – and by golly, was Jarvi cross when some enthusiastic audience member started to clap before the final notes had gone. He is obviously a man who dislikes applause at the “wrong” time, incidentally. He did his best to pre-empt the inevitable applause at the end of the resounding third movement by sailing straight into the finale. Every note of this work was given loving, intelligent attention by a conductor who evidently admires and respects the piece.  And the orchestra rose to this with some magnificently playing. The brass, in particular, did a fine job in the third movement and bassoons, Robin O’Neill  and Shelly Organ shone through like sombre stars in all three works.

I’m not sure this concert needed the rather laboured title “Romantics and Rebels” but it’s good to hear in a single evening three contrasting works from three different countries spanning over a hundred years.