You’d expect mature, measured work from octogenarian Herbert Blomstedt and that, in this enjoyably focused concert is what we got. Mr Blomstedt now moves stiffly when he reaches and exits the platform but his unshowy, baton-less conducting is free and fluid, mostly from the wrist, with little or no reference to the score in front of him and rarely anything as humdrum as beating time. He reminded me, in different ways, of both Boult and Klemperer – both of whom I caught live towards the end of their careers. And the Philharmonia clearly responds well to his understated style. 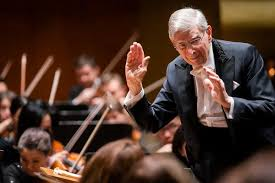 Rather unnecessarily entitled Musical Heroes, this two work concert brought together Mozart’s powerful 40th symphony with all its stirring G minor and Beethoven’s Eroica – larger forces on stage –  which unfailingly manages to sound ground-breaking over 200 years after it was written.

Blomstedt gave us plenty of understated elegance in Mozart’s opening molto allegro followed by an exquisite andante. I really liked the way he allowed the woodwind interjections to glide through the texture – which also speaks volumes for the pleasing acoustic in the Marlowe which, unusually, works just as well as a concert hall as it does as a theatre. There followed an incisive third movement and a fourth characterised by mercurial tempi and precision.

And so to a memorable Beethoven performance. Blomstedt had the Philharmonia configured with first and second violins facing each other with timps angled off to his right and basses to his left. This meant that the principal cello struggled for eye contact with the leader and, owing to the conductor’s forward position, the leader couldn’t see his face most of the time. It looked awkward but didn’t seem to affect the sound.

Blomstedt doesn’t do everything at “authentic” Beethoven prestissimo as Norrington or Eliot Gardener routinely do which means we were treated to a lot of detail – with every rhythmic and melodic nuance coaxed and shaped by his expressive hands. I especially liked the management of the tension preceding the convention-breaking horn discords in the first movement and its contrast with the lyrically evocative passages. The second movement was, frankly, eccentric with too many exaggerated dynamic and tempo changes but the nicely judged fugal section and the rich string sound in the scherzo made up for it. So did the grandiloquence of the finale in which friskier moments highlighted the strength of the legato, fortissimo sections.