The now well-established partnership between the Philharmonia and the Marlowe Theatre continues to bring out the best in both. On this occasion the orchestra was in pleasing form and the auditorium full of enthusiastic concert goers – and it always surprises me just how well the Marlowe works accoustically: a rare thing for a multii-purpose performance space.

We began with Bach’s third Orchestral Suite – not a common choice for the overture slot and therefore good to hear.  Some of the openings were ragged (possibly because Philippe Herreweghe’s understated, baton-free conducting style was initially less than incisive) but the sound soon settled. They played the famous second movement with lots of appropriate sustained piano in the upper strings and well controlled underpinning accompaniment in the lower. 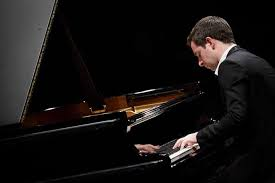 Bertrand Chamayou trotted out Mozart’s piano concerto no 23 in A (K488) with assurance although it was a bit odd to see him peering into the music he’d laid flat on top of the strings of the fully open grand he was playing as if he were at a rehearsal. His tender account of the lyrical middle movement was attractive and he played the finale with lots of French insouciance. Lovely work from the bassoons in the allegro assai too.

And so, in a concert, with the rather contrived title Gods and Mortals to the glories of the Jupiter symphony, in which the single flautist did a magnificent job and the whole focus was suddenly much sharper. The orchestra found real warmth of tone in the first movement and give us very clear finale in which the busy string work was delivered with  admirable precision.

Herrewghe had configured the orchestra for this concert with second violins to his right and cellos and violas in front of him half left and half right. As this arrangement usually does, it made the string sound seem more coherent and it was good to be reminded  how well both Bach and Mozart balance their string writing.