Young British conductor, Alpesh Chauhan, was new to me but I’m sure I shall see a lot more of him before long. He has the Philharmonia totally under his baton with which – against the current fashion –  he beats time clearly. He also has a very expressive left hand, each finger on which seems to communicate its own message. And I expect, in time, he’ll learn to smile. He certainly had plenty to feel proud of in this all Russian concert. 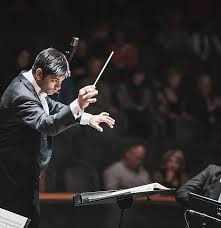 We began with Tchaikovsky’s The Tempest – an early piece which doesn’t get performed as often as it deserves to. There are some terrific brass passages and lots of intense hard work for strings and piccolo. It sounded pretty good in this performance with a strong sense of story telling.

Shostakovich’s second piano concerto is much more familiar and  Valentina Lisitsa made it sound fresh and exciting especially in the frenetic first movement in which she delivered almost every one of her thousands of high speed fortissimo notes. I enjoyed her quiet smile at the recapitulation too. She’s an unshowy performer, and here she was accompanied by some fine, incisive orchestral playing complete with crisp col legno bowing, vibrant pizzicato and snare drum. The contrast as we moved into the warmth of the lyrical andante was delightful.

Pictures at an Exhibition is always a showstopper. The sheer colour and verve of Ravel’s orchestration sells itself. This was a  pleasingly energetic but well controlled performance, particularly in the arresting glissandi moments, perfectly punctuated by the percussion section’s whip. There was also some lovely solo work from wind and brass. When we finally reached the Great Gate of Kiev the tubular bell moved me, as it always does. And if the intonation was fractionally wonky in places and the timing was awry once or twice then it simply didn’t matter. The grandiloquence of the piece carried the day and ensured the audience left feeling uplifted.

One gripe though: Why doesn’t the Philharmonia list the names of its players in the programme – perhaps on a slip for each concert? I would like to cite some of the players for especially strong solo work but I can’t because I don’t know who is who.