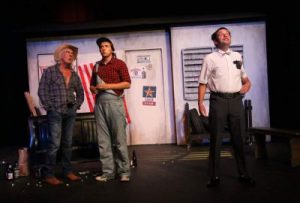 What a playwright James McClure (1951-2011) was. This pair of linked one-act plays are skilfully constructed with impeccably observed naturalistic dialogue. And they’re in good hands with Roy Drinkwater directing six talented actors. Each of them knows how to listen and react so that audience attention is focused – something which is often missing even in professionals.

In the first play Bourbon and Laundry we’re in a small town in 1970s Texas where three women, who’ve been to school together, meet in Elizabeth’s hot, sunny back yard. They chat, drink whisky, quarrel and fold laundry as their past is gradually revealed. Troubled, enigmatic, pregnant Elizabeth (a very convincing Laura Kimpton) is worried about her missing husband Roy, back two years from Vietnam and unsettled. Hattie, played with terrific sensitivity by Lucie Nash, is brash and uneasy. She’s unhappy in her life, has married the wrong man and bravely covers it with humour. Emma Thomas’s Amy Lee is brittle and hiding something.

The second – parallel – play Lone Star gives us two brothers, one of whom is Elizabeth’s errant husband, Roy (Tim Hinchliffe) outside a bar along with Amy Lee’s husband Cletis (Dan Coles) in the evening of the same day. The rapport between Tim Hinchliffe as Roy and Christy Hinchliffe as Ray is very powerful. Roy is angry, unhappy and drinking hard. Ray is a very funny younger foil with a strong line in dead-pan humour. Then comes a serious confession and the mood changes. Coles, meanwhile, presents a flawed, nervous inadequate character with sexual problems which, reveal why Amy Lee is as she is. And both plays are haunted by a man they all knew, now in prison for car theft, named Wayne Wilder. The writing, like the acting, is very deft.

I think the Lindley Players go from strength to strength. They tackle a wide range of interesting material (the next show is Stephen Sondheim’s Company 25-19 October) and consistently achieve a near-professional standard.