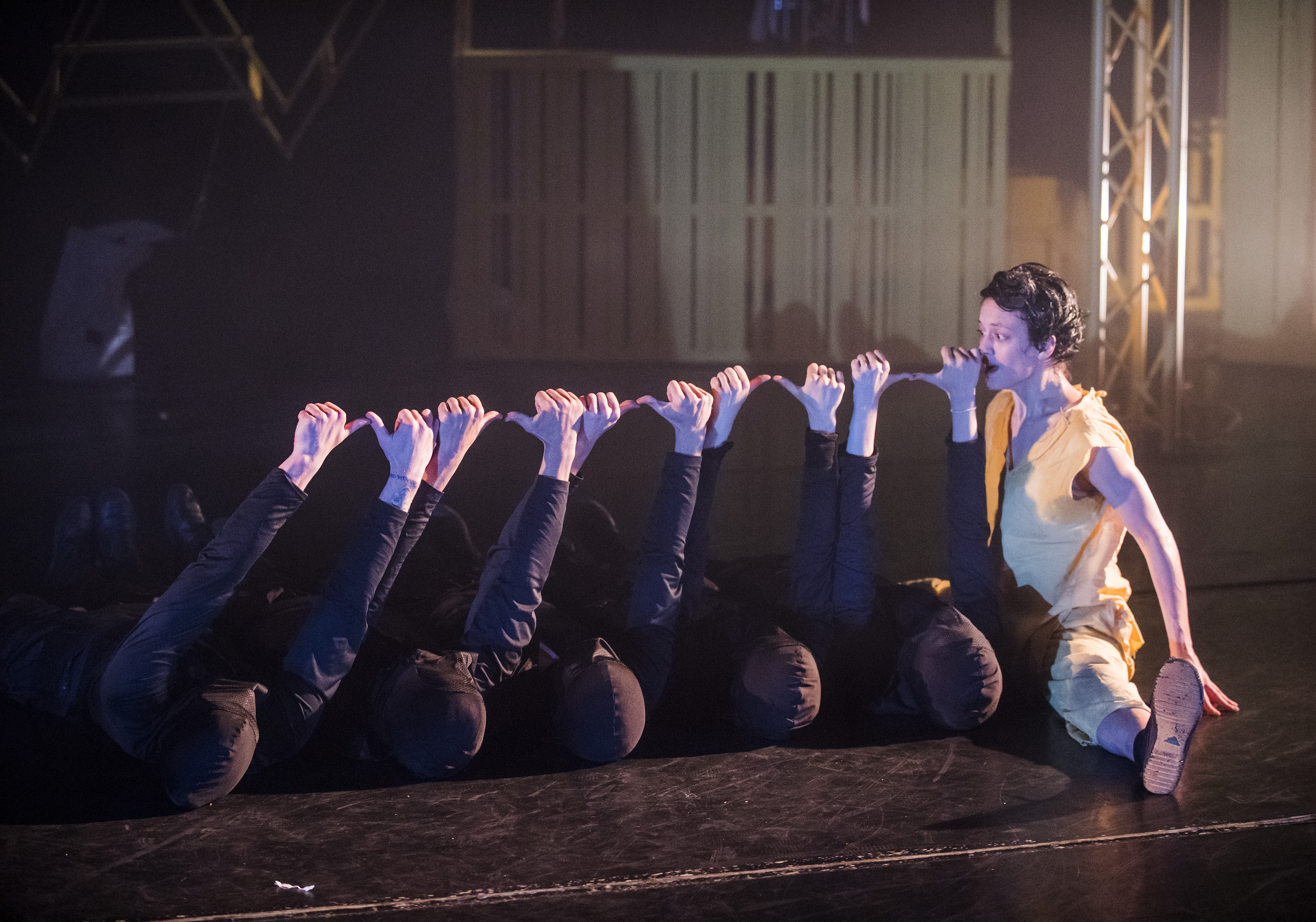 This show is rivetingly original. Staged in the sort of dim light usually reserved for puppetry, it includes a silhouette sequence, work with trapeze, bungee and flying. A fascinating sequence involves six performers, hands linked, rolling in turn slowly through 360 degrees to represent a huge cog wheel. Then there are two people chatting animatedly in a restaurant – their faces painted on to feet with toes waggling expressively and hands (two other performers behind?) acting like mad. Moving lights work to terrific effect too and ultra violet technology may have been around for a long time but it still impresses – here three pairs of ultra-violet lit hands represent a huge talking face.

Pinocchio is, of course, a puppet and Jasmin Vardimon has returned to the unsentimental tenor of Carlo Collodi’s original 1883 book rather than allowing herself to be side tracked by any of the many interpretations since, including Disney. This Pinocchio, whose movements remain floppy and puppet-like throughout – as he is manipulated by almost everyone he meets – is discovering what it means to be human rather than turning into a real boy.  And Vardimon choreographs exquisitely. No one who sees this show is going to forget the monster tormenting Pinocchio formed from the linked undulating arms of a line of performers.

The music which accompanies all this is borrowed from many sources to suit the mood of each episode. We leap effortlessly from Beyonce to Shostakovich and from The De Leeuwin Dutch Street Organ to accordion music from the Faroe Islands among many other things. Steven Glasser’s recorded narration grates, however. The movement in this show tells the story expertly and needs no words but it’s a minor objection

Jasmin Vardimon must be one of Britain’s most talented choreographers and educators. Her company, based since 2012 at the Jasmin Vardimon Production Space at Ashford, Kent, is supported by Ashford Borough Council, Ashford Leisure Trust and Arts Council England. And Pinocchio is co-produced by Gulbenkian Theatre and Kent County Council along with Sadler’s Wells. It is most encouraging to see such a splendid dance company getting the support it so richly deserves. I was also delighted to see hundreds of enthusiastic dance students and young dancers in the audience at Sadler’s Wells.