In praise of off-beat venues

I’m coming to the conclusion that I almost prefer the quirky originality of small, often unsung, venues to the grandiloquent glitziness of, say, The London Coliseum or the Barbican.

In the last week I’ve seen a strong amateur production of The Elephant Man in the studio at Broadway Theatre, Catford, a rather splendid secondary school take on Barnum in a sports hall converted to a Big Top and Sweat at Tower Theatre, Stoke Newington, a new venue which specialises in supporting emerging non-pro talent. None of these shows was perfect – obviously – but each, in its own way, had much to commend it.  Broadway Theatre, by the way, is going dark for 12 months from this summer for a long overdue refurb. I’m hoping that, as part of the renovation, they put in some house lights bright enough to see your feet by. I tripped twice in the gloom while I was there last week – but it’s a relatively minor gripe.

Yes, I get around – this week I have shows at Lion and Unicorn in Kentish Town and at Omnibus Theatre, Clapham. The latter is a first for me. It’s described as “intimate theatre” so I expect I shall like it. And after that it’s back to the rather more mainstream Marlowe Theatre, Canterbury – twice – next weekend.

It’s the feistiness of these small spaces I find so attractive. Many of them work within  pubs, of which there are 90 or so across London and more in other cities. Going to, say, The Old Red Lion, Islington, Upstairs at the Gatehouse, Highgate or Bridge Theatre, Penge is always an interesting, often enjoyable experience. I’ve seen some excellent work in such places, often featuring actors I’ve seen elsewhere. Of course, they don’t always get it right. What production company does? But – given that fringe venues rarely have any funding from anywhere apart from what they can raise – the courage to be adventurous is admirable.

That’s why I’m a regular at, say, Jermyn Street Theatre and why I get to New Diorama, Southwark Playhouse and Union Street Theatre as often as I can too. And, a recent discovery, I’m getting fond of Above the Stag at Vauxhall.

If only there were more days in the week to explore more venues. 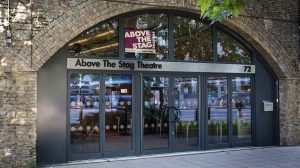