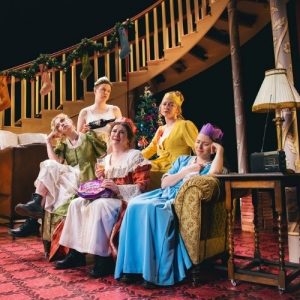 Pride and Prejudice* (*sort of) continues at the Criterion Theatre, London until 17 April 2022.

There is a huge post-pandemic appetite at present for shows which are upbeat and funny. And Pride and Prejudice* (*sort of) ticks all the boxes.

Told from the point of view of five sassy servants (who rarely get a mention in Austen’s 1813 novel), this is a hilarious romp through the plot with karaoke as the linking arch. It manages to be both irreverent and affectionate.

The five actors, all female and several of them actor-musicians, play all the parts as servants dressing up to tell a story. At times their costume changes happen at make-you-gasp (and laugh) speed – Brian Rix and co would have been hard put to beat it.

High-spots include Isobel McArthur (who wrote this show and co-directed with Simon Harvey) as Mrs Bennet – much more down to earth than usual and fond of a drink when it all gets too much. Her sultry, deep-voiced, unsmiling Darcy – given to striking poses – is quite something too ….

Read the rest of this review at Musical Theatre Review: https://musicaltheatrereview.com/pride-and-prejudice-sort-of-criterion-theatre/