Famously founded in 1999 by Daniel Barenboim and Edward Said, West-Eastern Divan even looks different from other orchestras. It comprises young players from Israel, Palestine and several Arab countries to promote coexistence and intercultural dialogue and you can see the unusual and very welcome diversity before they play a note. 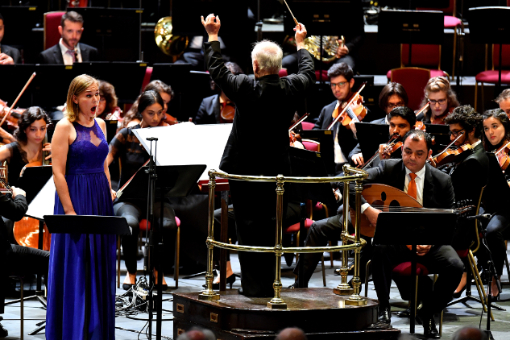 It’s also eye-catching because it’s so huge that it spread along all the tiers right up to the beginning of the Royal Albert Hall’s choir seating although different players come and go for different works – the programme for this rather special concert being as diverse as the players. If anything, the choice of works felt a bit random.

Daniel Barenboim, of course, has become one of those rare conductors who is so beloved and respected that he gets rapturous, near-ovatory, applause even before he raises his baton. In this case he was greeted by a very excited hall full almost to capacity.

We started with the Polonaise from Eugene Onegin. Not advertised in advance, it formed a welcoming, vibrant, tuneful warm up, almost like an encore at the “wrong” end of the programme. Then, still with Tchaikovsky, it was on to Lisa Batiashvili and a rousing account of the violin concerto. Georgian born, she gave us lots of Russian colour with exceptionally clear runs in the first movement. She took it a tad slower than some performers but it was a treat to hear the detail so lovingly articulated. Her dynamics are beautiful too. Filling the vast space of the Royal Albert Hall with very soft trills on harmonics so that every single listener is gripped is no mean feat. Her drama of her finale was well judged and balanced too.

After the interval came the London premiere of Looking for Palestine by David Robert Coleman. It is, effectively, a setting of two scenes from the play, Palestine by Najla Said, Edward Said’s daughter, and tells the story of her thinking about yearning for Palestine at the time of the 2006 war in Lebanon during a visit there and while living in New York.   Musically it’s dramatic with a great deal of interesting percussion – programmatic bangs, whistles and sirens – with anxious twittering strings and a strange twanging across-the-body plucked, string instrument (lute?) which plays a continuo at the front. Barenboim conducted the piece carefully from a score the size of a broadsheet newspaper – the only work in this concert which he didn’t do from memory.

The text was sung in this performance by soprano Elsa Dreisig and that was where the real problem lay. Almost all of it is pitched very high in the voice which meant that the words were, in this case, totally inaudible. Without the printed programme which included the words for this piece it would have been utterly impossible to work out what was happening. The best music speaks for itself. It doesn’t need explanation or resources to support it. I did admire Dreisig’s wistful glissandi, though.

It was a moving concert because of what West-Eastern Divan stands for – a concert with a sub-text, if you like.  But the standard is impressive as well.  The power of the playing and musical cohesion, especially in the first half, moved me in a different way.