Marin Alsop is one of those conductors whose very presence in the building creates a buzz of excitement. And this time she was at the Proms for the first time with her own “band”, the Baltimore Symphony Orchestra in a concert which marked the end of a high profile Bernstein centenary weekend. The fact that Alsop was a protégé of Bernstein, and knew him well, added yet more frisson. 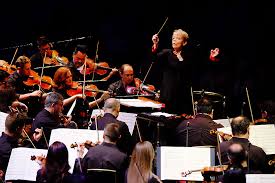 It was a concert which began and ended with fire. Bernstein’s Slava! (A Political Overture) is a lovely pot pourri of characteristic Bernstein jazzily syncopated melodies and includes a delightful oboe solo, percussionists visibly counting with their bodies and familiar recorded voices over the music to ensure that the piece lives up to its title.

An hour later, the concluding performance of Shostakovitch’s Fifth Symphony was pretty colourful.  Alsop, working without a score, achieved terrific tension in the first movement between the driving strings and interjections or responses from strident brass, gentle woodwind and assertive piano. She is very good too at finely calibrated dynamics and the Royal Albert Hall acoustic supports that especially when it’s (literally) full to the rafters as for this concert. Also enjoyable were the bassoon solo at the opening of the allegretto and the leader’s solo with its sparky glissandi in and out of harmonics. Then we got a suitably mysterious largo with lots of nicely controlled warmth from lower strings and a triumphant rich sound, as incisive as it needs to be, in the fourth movement.

The problem was the jam in the concert sandwich which turned out to be a very restrained, less than jammy,  account of Bernstein’s Second Symphony: The Age of Anxiety with Jean-Yves Thibaudet playing solo piano in what is, in effect, a piano concerto. Of course, the piece is Bernstein in a most sober, Samuel Barber-like mood but it’s a pity to play it so dully. Of course Thibaudet played competently and Alsop ensured that the orchestra supported him effectively but there was nothing engaging about it apart from some nifty zylophone playing.

Incidentally, this is the first time in over 50 years of concert going that I’ve ever seen a page turner on stage with a concerto soloist. There’s no reason why not, of course, but maybe it suggests that Thibaudet is still feeling his way with this piece which is why it seemed a somewhat lacklustre performance? Not that any of this stopped the enthusiastic Proms audience summoning him back for an encore.