The Rise and Fall of Little Voice (Susan Elkin reviews)

The Rise and Fall of Little Voice continues at the Park Theatre, London until 15 September 2018.

This is a very funny show. It’s also deeply tragic. And director Tom Latter has made a remarkably good job of linking those elements so that it rarely feels disparate.

Mari, played by Sally George, is a total failure. She is a disastrous mother to her only child (played in this production by her real-life daughter Rafaella Hutchinson). She has driven her husband to an early grave. She’s an alcoholic living in a filthy house tartily trying to attract a man. 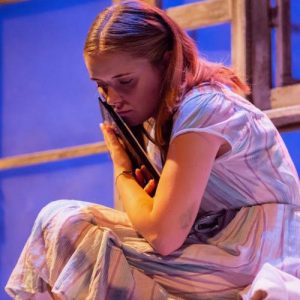 George finds all the right brittleness and vulnerability in Mari even as she delivers Jim Cartright’s hilarious one-liners and put-downs in a rich northern accent. The character is utterly pitiful and George – teetering about on her heels, falling out of her scrappy dresses laughing, shouting, weeping and more – ensures that we feel every single ounce of her underlying, unacknowledged despair.

Read the rest of this review at Musical Theatre Review: http://musicaltheatrereview.com/the-rise-and-fall-of-little-voice-park-theatre/