Haydn’s piano music is much less well known than his symphonies, choral works and chamber music but they’re well worth listening to especially in an intimate space such as Steinway Hall which sits behind the Steinway showroom in Marylebone Lane.

Roman Rabinovich is working with The Haydn Society of Great Britain to promote a wider knowledge of Haydn’s piano sonatas by recording them all for CD. This showcase was designed to draw attention to the project and to launch Haydn Piano Sonatas Vol 1 (First Hand Records) which was on sale at the event. 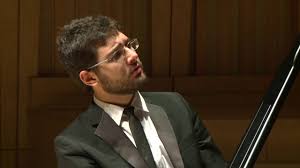 We began with Sonata in D Major Hob XVI: 37 which Rabinovich told the audience he would personally nickname “The Chicken.” He then stressed that clucking (as it were) motif on a rising triplet. In the middle movement he leaned quite heavily on the contrasting sober chordal D minor section before treating us to chirpy, witty finale.

Then we got Sonata in C Major Hob XVI.48 written 15 years later for the “newfangled” fortepiano. Rabinovich observed the difference in mood which is thoughtful until the finale, which he played at high speed like a rather jolly race. Later he played – with verve – the two-movement Sonata in B Minor (unusual key!) Hob XV1:34.

It was more than a piano recital, however. Sandwiched in with the sonatas was a short film by Ruth Schocken Katz documenting Rabinovich’s life, background and music. The son of two pianists he moved, aged 10, from Uzbekistan where opportunities were very limited to Israel where they weren’t. He is also an accomplished artist and a series of his drawings called “Imaginary Encounters with Haydn” has been animated by Adam McRae – fun to see pianist and composer enjoying a beer together, taking a selfie, going on a flight and more.

We were also treated to a very short (I’d have liked more) Q/A with music journalist Jessica Duchen who, among other things, got Rabinovich to talk about different sorts of pianos then and now. In the recording he plays a Steinway model D.

It was an enjoyable and informative 75 minutes. It’s just a pity that Steinway – of all companies and on its own premises – couldn’t find a creak-free piano stool for an internationally acclaimed virtuoso to sit on. The noise was both loud and distracting.