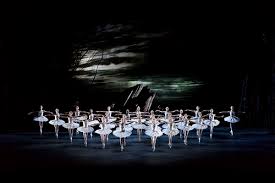 When I interviewed Emma Troubridge, ROH’s Head of Scenic Art, recently, she told me that this Swan Lake is the biggest show she has worked on in twenty years in the job. Having now seen it, I understand what she means. No wonder the audience of 2000 primary school children with whom I shared the experience gasped audibly and applauded spontaneously when they saw the massive, grandiloquent sets for Acts 2 and 3 (designed by John Macfarlane). The costumes – especially for the Spanish dance which is all swirly red, black and sequins – are stunning and choreographers Marius Petipa, Lev Ivanov and Liam Scarlett use every inch of the vast playing space. Everything is on a grand scale.

Seated by the press officer in a stage right box (with slightly restricted stage view) I had an unusual overview of the orchestra in the pit below me along with its conductor Valery Ovsyanikov. With my accustomed technical interest I could even see which positions the leader was using in the violin solos. It is, of course, a great joy to see this famous, beloved ballet accompanied by a full orchestra – hurrah for ROH production values – complete with four trumpets, plenty of strings including five double basses. This is what Tchaikovsky’s wonderfully powerful score needs but, sadly, doesn’t always get. Here it sounds sumptuous – especially in the final few pages with the brass sounding fortissimo tragedy and despair.

On stage, meanwhile, there’s plenty to admire too. Yasmine Naghdi is a fine Odette/Odile with suitably sustained pirouettes and plenty of fluid swan-like “flying” – leaving the ground with apparent effortlessness when dancing with the men: Nehemiah Kish as Prince Siegfried and Gary Avis as Von Rothbart, for example, both of whom have high levels of stage presence and all the lithe strength their roles require. The dance of the little cygnets is neat and appealing and the set pieces in Act 3 are a joy – especially the Neapolitan dance for which they use Frederick Ashton’s choreography. And the big “numbers” when many are on stage, especially the corps de ballet swan sequences look terrific because they’re angled and grouped so imaginatively. As a piece of theatre it’s also highly emotional and pretty moving.

The essence of good ballet is, of course, interpreting the music in a way which drives the story forward and doing so holistically. The potentially disparate elements have to be tightly integrated. This one ticks all the boxes.