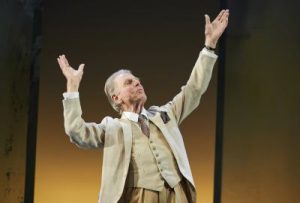 How good a poet was John Betjeman whose work I used to teach to O level students? He loved rhyme and rhythm – and jokes. Some of his work is very fine indeed although like all poets he had his banal moments which some critics took delight in being sniffy about even after Betjeman’s appointment as Poet Laureate.

Edward Fox – who gives us an entertaining single handed account of Betjeman’s work in this entertaining 100 minutes of theatre – makes no attempt to look, or even sound like Betjeman. Wisely he lets the words do the work. The delivery is ponderous but clipped and the vowel sounds elegantly twisted. When did you last hear anyone pronounce the second syllable of “Edwardian” to rhyme with “card” or “yard”? The consonants are unfashionably precise. Looking and sounding more like WF “Bill” Deedes than Betjeman, Fox conveys plenty of forthright irreverence. Sand in the Sandwiches is often very funny. It is also wistfully poignant in places. As you’d expect from an actor of Fox’s stature, calibre and experience he knows exactly how to pace it and how to deliver punchlines in character for maximum effect. The piece looks good in a simple, minimalist way too. The chairs and table Fox sits at are framed by a back screen is lit to change colour with the mood and to mark the ends of episodes.

Hugh Whitemore’s script unravels the sense of Betjeman’s life, work, relationships, achievements and views by seguing in and out of the poems seamlessly linked by monologue. He has resisted the temptation to include all the obvious crowd pleasers. Most of the included verse was new to me and, I suspect to most of the audience, which ensures that you listen properly. I shall long treasure the Gloria limerick, for instance. It’s hardly great poetry but it’s certainly great fun.

One actor shows depicting literary figures seem to have gone out of fashion. Remember Alec McCowen’s Kipling and Geraldine McEwan’s Austen? so it’s a refreshingly welcome change to have a new piece of gentle, thoughtful theatre in this genre.