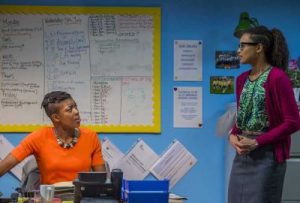 It’s a remarkable achievement for a very young playwright (early 20s) to have got a play staged by Antic Face at Southwark Playhouse with Charlie Parham directing. Other feathers in his cap include getting a capacity house on press night with at least three front line critics in the audience. Alex MacKeith’s School Play has been published too – by Oberon Books.

All the signs were good and, in many ways, the play lives up to expectation. We are in a primary school where dynamics and tension are pretty extraordinary. Tests dominate the thinking because without certain test results the school won’t get the all-vital pupil premium money to fund things such as trips to the National History Museum. So the school brings in young high flying graduates to teach after school revision classes – half welcomed, half loathed by full-time staff. What a melting pot! And it was inspired by MacKeith’s own experience of working as a imported tutor in a London primary school.

At the heart of all this is a remarkably fine performance by Ann Ogbomo as Jo, the head teacher. Her character is under enormous stress both at work and at home. Ogbomo conveys that with verve, passion and control whether she’s taking deep breaths, weeping, shouting or visibly and audibly switching on “professionalism.” She’s a very engaging and adept actor to watch. Lovely work too from Oliver Dench as Tom, the young graduate who is funny, sardonic and, eventually devastated. Fola Evans-Akingbola completes the three person main cast with a pleasing performance as the school secretary. There are also a couple of nice cameos from Kevin Howarth as the gruff, grumpy caretaker and as a very angry, threatening parent. At the end of the play a chirpy child arrives in the form of Gemma Fray or Vida King.

Full marks to Anna Reid’s set too. The primary school atmosphere is immaculately observed and captured. Also good is the sound track of children singing – in assembly – used as scene breaks. Michael England is the sound designer.

So there’s plenty to admire and enjoy but the play itself isn’t (yet?) quite right. There are some very strong scenes – Jo’s long speeches to Tom in Act 3 hit hard, for example. And the arrival of the parent in the head’s office makes real drama. On the other hand there are too many stretches which are quite amusing but add very little to the thrust so they fall a bit flat. Several underdeveloped subplots make the narrative feel unsatisfying. Billed at 90 minutes but actually running one hour 40 minutes the play needs to be shorter and more direct – without the subplots. Alternatively it could be half an hour longer (and include an interval) which would enable all the loose ends – such as the relationship between Tom and Lara and Jo’s personal life – to be tied up.