At a time of year when we are very accustomed to the sound of blockbuster Christmas hymns and songs belted out by big choirs, bands and in recorded format almost everywhere you turn, it’s quite refreshing to hear some proper Medieval carols sung with imaginative authenticity. 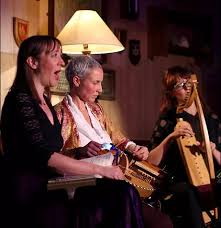 The concert – and it’s a touring show – opens with the English Medieval Carol Lullay, my child sung by Norburn and Prussner moving round the church separately, sometimes passing each other, and both holding candles. St Clement’s church has a fine acoustic around which the pure, vibrato-free voices resound in a way which is mysterious in a quasi-monastic way. It’s quite a scene setter and you really do feel as if you’ve shifted back half a dozen centuries.

The rest of the programme consists of a further twenty carols, one or two of them familiar (Past Three A Clock, the Coventry Carol and Stille Nacht ) but most of them not. It’s fairly compelling to listen to although some of the material is a bit samey and there’s an awful lot of minor key.

There were some discoveries, though. El noi de la mare, a Catalan carol dating from the 16th century is very pretty and resonant. Verbum Caro from Finland is uplifting.

The most striking thing about this performance is the musical rapport between Norburn (soprano) and Prussner (alto). Obviously these carols have been arranged and the two singers blend together perfectly with every harmony immaculately delivered – and they’re very exposed so there’s no room for error.

Accompaniment, where required, is played on harp or recorder by Pulkkinen who also contributes some instrumental numbers. Her playing, like the singing in this concert, sounds convincingly in period.

Some of the carols are also “accompanied” by on-screen animation created by Kate Anderson. I thought they added nothing, seemed trivial and that the performers should simply trust the music they’ve chosen to sing. My companion for the evening, however, liked them and said that the visual element helped to enliven the experience when the singing began to feel repetitive. Take your choice.