Everywhere I go people are talking about “gender fluidity” in casting and production concept. Women are being widely cast in roles originally intended for men – often depicting them as women. And sometimes it works in reverse. Having recently seen and loved both Sasha Regan’s Pirates of Penzance and Matthew Bourne’s Swan Lake I’m firmly persuaded that men can sometimes play women splendidly too.

And of course it isn’t exactly new. The Elizabethan/Jacobean lot had to cast young boys in female roles because women weren’t allowed on stage until after the Restoration in 1660. Pantomime traditionally features a man playing an older woman (“the dame”) and a girl as principal boy. Opera – in Handel’s time for instance –  used boys and castrati to sing women’s roles and trouser roles such as Cherubino in Mozart’s The Marriage of Figaro is today usually sung by a woman. Sarah Bernhardt played Hamlet and so it goes on.

The question is can you have too much of a good thing? I overheard (part of my journalistic stock in trade)  two completely separate conversations last week in different venues seventy miles apart. In both cases well known A list critics  – by chance a man and a woman on either occasion – were gloomily and wearily discussing the prospect of yet more women cast as men just for the sake of political correctness and, arguably, to redress a traditional imbalance which might – just might – have swung too far. It is now quite difficult to find a production of any established play in which there is no cross-gender casting although one of the critics I was eavesdropping on did say that he thought Harriet Walter was the best Brutus he’d ever seen – referring to the Phyillida Lloyd production of Julius Caesar at Donmar Warehouse in 2012.

Outside the conversations I was listening in on, everyone was full of praise for Golda Rosheuvel’s female Othello at Liverpool Everyman last year and Tessa Parr’s Hamlet at Leeds Playhouse earlier this spring – not to mention Glenda Jackson’s extraordinary Lear at The Old Vic in 2017 and Michelle Terry’s Henry V at Open Air Theatre Regent’s Park in 2016. And those are just examples from amongst many strong possibilities.

Of course women can play men’s roles – we all did it years ago in our girls’ schools, after all. My friend, I remember, made a pretty good fist of Thomas More in A Man for All Seasons, for example. When I was teaching, much later, in a girls boarding school there was a creditable all female production of The Tempest too. And drama schools today often have more females than males so gender fluidity has to be the modus operandi. Fourth Monkey’s excellent, predominantly female, Henry V last month, for instance, came up with some very original takes on the play.  Such casting makes for interesting challenges and new slants and that’s very positive.

I welcome all that with open arms because anything which makes me think about these plays in a new way is a bonus.  I also want actors – irrespective of their sex – to have maximum opportunities.

On the other hand it plays havoc with the whole concept of casting actors to type. Good casting directors look for someone whose personality and USP lends itself to the role being cast. Well, of course, a competent actor can play anyone (or anything) but sex (“gender”) is a pretty major part of who you are and if you’re playing against type to that extent it might, for some, be a requirement too far. And it shows. You certainly see some pretty unconvincing performances by women acting as men, these days, especially in minor roles.

I think, perhaps, it usually works better when the concept is that the role has become a female one – then the actor can be truer to herself –  rather than casting a woman to act as a man.

I also think that the industry is in danger of getting too gimmicky about the whole issue. Yes, let’s see some women cast in non-traditional female roles, preferably re-thinking the play to bed the concept down coherently.  It’s one, completely valid, approach. But I also want to go on seeing see men playing lead roles in major plays. There is plenty of room for both ways of working.  At present, however, productions – especially of Shakespeare – in which the main casting is men as men and women as women seem to have become an endangered species.  And that is bonkers. 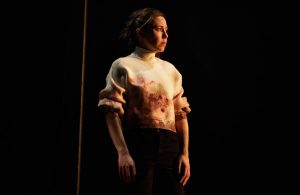