Starting (in term 1) as you mean to go on

I have been known to criticise drama school graduates who think the world owes them a living and that all they have to do is wait for the phone to ring. And I have very little time for university undergrads who seem to be in pubs doing nothing in particular except a lot of drinking from early afternoon (when they crawl out of bed) until midnight. Then I meet someone like GSA third year student Ross White and my faith in young people is totally restored.

Ross, 21 who comes from Belfast, teamed up with fellow students Tom Berkeley, Alex Coppola and Jessica Alade sonn after they all began training on GSA’s Acting course. By Christmas 2014 they’d formed the company Split Second Productions and a few months later they were in Edinburgh presenting a pair of short devised plays about time. That was summer 2015.

“We had to self-fund the first time but I was determined that we’d quickly move on from that” he says. In 2016 they staged a two week open air run of A Midsummer Night’s Dream at Berkeley Castle in Gloucestershire where they sold out at nearly every performance. “It was really successful, largely thanks to Dr Jaq Bessell who teaches at GSA, and happily agreed to direct Spilt Second’s shows” says Ross telling me several times that “Jaq has been utterly fantastic.

Well this is definitely a good news story because last year in Gloucestershire the cast of 13 – who between them also produced, marketed and did everything else which needed to be done – earned their expenses.

“It was always the plan that we’d be able to earn professional fees before we graduated and that is what’s going to happen this year” says Ross.

“We’re going back to Berkeley Castle for a three week rep season playing A Midsummer Night’s Dream and Much Ado About Nothing. We open there on 25 June and run, usually Sunday to Thursday, until 11 July.” Last year the company attracted lots of school parties at matinees and family audiences for other performances.

Ross and his colleagues, astonishingly enterprising and adept, are hoping to become a resident company at Berkeley Castle, perhaps – once they’ve graduated – offering indoor shows there at other times of the year. At the same time each of them plans, obviously, to develop his or her career as an individual actor working elsewhere, alongside Split Second commitments as and when opportunities arise.

I am more impressed than I can say by the proactiveness of these young actors. Yes, they had a slight advantage because one of their number, Tom Berkeley, is part of the Berkeley Castle family but the quality of the work must be what’s filling the marquee they perform in. That’s why I’m looking forward very much to seeing them in action at Berkeley Castle in the summer. See you there? Booking opens in April http://www.berkeley-castle.com/ 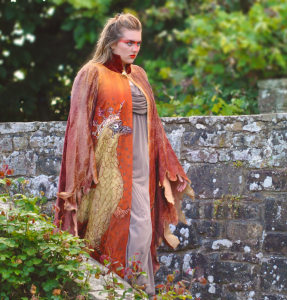