In his prime My Loved One used to run along the tops of beach breakwaters to show off to the kids and anyone else who was about. He was proud of his agility and balance and, to be honest, a bit boorish about it. Then came a ladder accident in 2002 which put him on crutches for months and now Ms Alzheimer’s has shoved in her nasty oar.

Today he has problems with walking down steps and stairs. Up isn’t quite so bad but the descent is tortuous. “I’m frightened of stairs because when I look down it’s as if they’re coming up to meet me” he says, explaining a not-much-discussed but, I suspect, quite common Alzheimer’s symptom.

Ms A has, apparently, wormed her dastardly way into the bit of his brain which manages balance – and scuppered it. I find this excruciatingly frustrating, for example, when I’m standing at the bottom of a flight of stairs on the tube waiting for him and the train behind me – which of course I would have hopped on had I been alone – pulls out of the station. It must be even more frustrating for MLO himself of course, and I do realise how selfish my plaints must  sometimes sound.

Eighteen months ago, as regular readers of these blogs will know, we moved out of our spacious, town centre Victorian villa in Sittingbourne and downsized into a 3 bedroom 1930s house in our native South London. Our old house had 52 steps from attic to basement and both MLO and I went up and down them easily all the time. I  thought  the new house which has a single flight of 14 stairs would be even easier, but actually, step-wise for MLO it isn’t.

It’s to do with the relative space inside the two houses. All those steps in our former home were quite shallow and the staircases were a bit wider. Our 14 “new steps” are a good bit steeper and there’s a tight turn (big metal hand grip on the bend for MLO now) at the top. In fact, our younger son aged 42 and as fit as a flea, managed to fall down the entire flight when, a few months ago, he tried to race down them in a hurry – fortunately sustaining only a couple of bruises. His three year old daughter still says solemnly whenever she sees us or our stairs “Daddy fell down your stairs” and I expect she’ll remember the drama of it for the rest of her life.

This potentially dangerous gradient means that MLO comes down our stairs very carefully hanging on tightly to the banister rail – a new one put in for both cosmetic and safety reasons last year. The speed isn’t even andante. It’s largo.  And it makes him look, alas, much older than his 72 years.

It’s the same when we’re out, I don’t think I’d noticed until recently just how many flights of steps you walk down to get onto the tube – or off many mainline stations. At Elephant and Castle, for example, there are two huge flights to get to ground level when you “alight” (to borrow a bit of transport-speak)  a Thameslink train and it’s so busy that it isn’t always easy to get to the side of the staircase so that you can hold the rail. MLO has got into the habit of waiting until the crush has dispersed if necessary because he really must have access to that rail. Then, for the Underground, you go down in a lift and then down lots more steps especially if you’re heading for the Bakerloo line. It takes MLO quite a while and I have to build in extra travelling time when he’s with me.

Until recently we were the sort of people who routinely walked down and up stairs from choice in hotels, big shops and so on because it’s healthier than the mechanical alternatives. And I still do. But if we’re out together it’s now quite a relief to put him safely on an escalator, or even in a lift, and know that he doesn’t have to do all that painful, step by step, one foot looking anxiously down as he does so.

Those breakwaters suddenly seem a very long time ago. 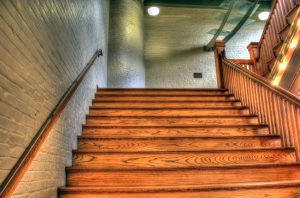