Suffering for art? No thanks

It is, of course, a fashionable theatre-going requirement to admire, and feel empowered by, the scruffy “edginess” of improvised venues. I don’t. Sorry, but there it is.

I saw a very fine show (Associated Studios with Sister Act) at Vaults Theatre near Waterloo this week. The walk into the theatre (I’ve been there before but had evidently blanked out the awfulness) is like some sort of Soviet Russian dungeon, the bar so dark you can’t see to read the programme, the “recycled” seats uncomfortable and the lavatory provision woefully inadequate. It’s a good job  the quality of the show was so high that it almost made up for it.

I loathed the old Union Theatre too in its original home where the subterranean loos were dismally abysmal and any sort of creature comfort missing. The new premises over the road are much better. The only thing I miss about the former premises is the charmingly run café (separate business) which used to operate in the entrance arch.

Many pub theatres – much as I love their feistiness and the work they often produce or receive – struggle to be adequately provisioned too. I’m confident that The King’s Head, for example, in many ways the best pub theatre in London, won’t expect its punters to teeter down a steep flight of stone steps for a wee when it moves into its new premises on Islington Square (next year?)  There will, I hope, also be a tiny bit more room between audience members. Call me old fashioned but I really don’t care for this haunch-glued-to-haunch business with complete strangers and it must be a lot worse if you’re larger than I am. The Old Red Lion, also in Islington, springs to mind for its dreadful ladies’ loo too although the pub/bar area at the front is lovely.

Not that a theatre has to be opulent to work. Some of the old glitzy Victorian theatres are nearly as cramped and uncomfortable (The Fortune and Ambassadors Theatres, for instance) as tiny, make-do ones. Some new theatres – New Diorama and Above the Stag – are quite modest but decently comfortable. It can be done without resorting to the full-scale comforts and size of, say, The Bridge Theatre.

I feel like the little boy (girl?) in Hans Christian Andersen’s The Emperor’s New Clothes story. I think it’s time some one said it. Let’s stop smilingly pretending that tatty, cramped dives with dreadful lavatories are more artistically expressive than venues which conform to modern standards. 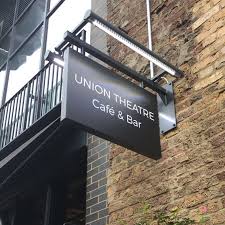