Once plays at Ashcroft Playhouse, Fairfield Halls, Croydon until 11 January 2020 before the tour continues.

Based on John Carney’s film, this show – first staged in 2011 – tells the story of a local musician and a young Czech woman whose paths cross in Dublin. Enda Walsh’s book is poignant, powerful and deeply compelling.

But, in this production, it’s the music which makes it special. The entire cast – including four fine violinists – are actor-musos of the highest calibre. They are on stage jamming folk music in a pub as the audience finds their seats at the start and the vibrance and energy is contagiously exhilarating …

Read the rest of this review at Musical Theatre Review: https://musicaltheatrereview.com/once-fairfield-halls-croydon-and-touring/ 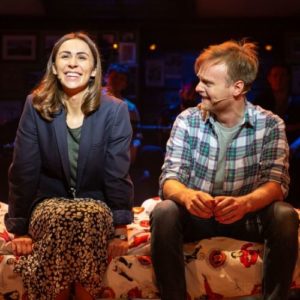