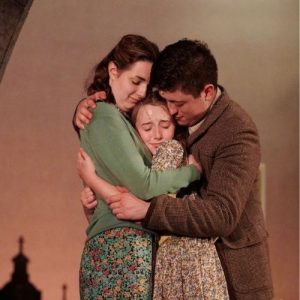 Henrietta, presented by National Youth Music Theatre, continues at The MCT at Alleyn’s, London until 21 August 2021.

Commissioned from Alex Parker and Katie Lam by NYMT for last year but, perforce, postponed until now Henrietta is a good piece for a youth organisation.

NYMT works with young people from age 10-23 which means there are children to play the juvenile roles along with competent performers in their early twenties able to play adults in their thirties and beyond with conviction.

It’s Amsterdam in 1944. Some Jews are in hiding, some people are trying to help them while others – we’re in the heart of the community with people who’ve known each other all their lives – agree with occupying Nazi policy or seem to.

Read the rest of this review at Musical Theatre Review: https://musicaltheatrereview.com/henrietta-national-youth-music-theatre/