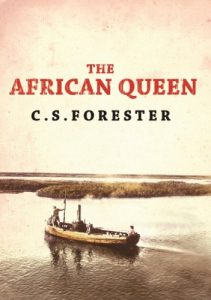 What strikes me now, over 50 years since I first enjoyed it, is what a classic it is in every sense. If you subscribe to the view, as I do, that all fiction is rooted in a handful of basic, timeless stories then The African Queen is at least three of them. In case you don’t know the story it gives us a frumpy missionary’s sister and a cockney mechanic forced by circumstances to escape down a treacherous central African river to outwit the ruling Germans in 1914. Thus it is a quest story as they head for the lake with a crazy plan to strike a blow for Britain. It is also a  seeing off the monster (Germany) narrative and against the odds it is also a very unlikely, passionate, tender love story. No wonder it works so well.

Of course EM Forster would have had a few things to say about it As he points out in Aspects of the Novel, Homo Fictus doesn’t quite function like Homo Sapiens. Although Alnutt and Rose bathe off the boat privately from each other at first we are left to assume that their bladders and bowels stop working when they leave the Mission. And doesn’t Rose have periods? After weeks of “marriage” to Alnutt she’d probably be pregnant anyway but it’s a minor gripe – and really just a reflection of how many novels were written 86 years ago although I’m not sure I noticed it when I first read it.

Next week on Susan’s Bookshelves: A Twist of the Knife by Peter James