Susan’s Bookshelves: The Death of Grass

My mother was very taken with John Christopher’s The Death of Grass. Fascinated by the idea that a grass-attacking virus could destroy civilisation, she talked about it a lot. I suppose she must have read it when it was first published in 1956. I came to it a few years later as a teenager. Then, it turned up in the stock cupboard of at least one of the secondary school English departments I worked in so I found myself teaching it as a text. Memories of it – the virus from China which couldn’t possibly reach Britain, government mishandling, public panic – have haunted me during the last year for obvious reasons. So I reread it.

I was bowled over. “Remarkably prescient” as Robert Macfarlane writes in his preface to the 2009 Penguin Classics edition. He also refers to living “in an age of epidemics” and that was eleven years before anyone had heard of Covid19.

At the beginning people in The Death of Grass are dismissive of the virus. It’s a long way away and it attacks only certain sorts of grass. Then it mutates (sound familiar?) to affect all grasses including wheat, barley, rice, rye and anything cattle might graze on. And of course it spreads rapidly. John Custance and his friend Roger – who gets a government tip-off about imminent terror – decide to take their families to the perceived safety of John’s brother’s farm in an enclosed valley in the north of England. What follows is a quest novel – and yes, I do subscribe to the theory that there are really only seven basic stories. Inevitably things get more and more difficult as they near their destination.

It’s a pretty violent novel. John, Roger and the other men who eventually join their party have fought a war only a decade earlier. They are used to combat, lines of command and accepting that the end justifies the means. So these civilised, educated men, and those who obey them,  single-mindedly kill and pillage in their determination to get their wives and children to safety. Civilisation breaks down incrementally as you turn the pages. You are never, moreover, quite sure how it will end and I’m not giving anything away here.

Macfarlane compares it with William Golding’s Lord of the Flies, published two years earlier in 1954. It too studies the way in which the veneer of civilised behaviour and what might have once been called human decency, often driven by religious conviction and altruism, disappears almost overnight when the going gets really rough. Constraints disappear at terrifying speed. Both these books were written when the horrors of Nazi Germany and the Nuremberg trials were very fresh in public memory. And it shows.

So, 65 years later, does The Death of Grass stand the test of time? Yes, very much so especially at present when we are seeing mob violence, alarming hospital ward scenes and “reassuring” (not), draconian Government spokespeople on our TVs every night.  And I can’t resist pointing out that although there is justified  very real fear of starvation and the destruction of everyday life in The Death of Grass, it’s the chilling Government reaction to the virus which drives the real terror. Their policy is far, far worse than anything our current lot have yet dreamed up in real life but, as you read in horror, it makes you think …

I’m also struck by how short important novels used to be. The Death of Grass stands at just 195 pages in the Penguin Classics edition. It’s a while since I’ve read anything published in recent years which is quite so succinct, And I like that.

John Christopher (real name: Sam Youd, 1922-2012) never wrote another bestselling adult title but went on the rework similar ideas several times in a lot of speculative young adult fiction including The Guardians, Empty World and The Tripods trilogy which was serialised by the BBC in 1984.  He lived in Rye and once came to talk to teachers at a conference I attended.  Sadly, he was a poor speaker. But I don’t hold that against him. The power of The Death of Grass is enough for me. 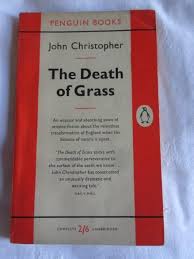