Susan’s Bookshelves: An Experiment in Love by Hilary Mantel

Hilary Mantel, now in her late sixties, was a successful award- winning novelist long before she disappeared for 15 years to live with the Tudors, producing Wolf Hall (2009) Bring Up the Bodies (2012) and The Mirror and the Light (2020) –  becoming, incidentally, the first woman ever to win the Booker Prize twice.

I found a hard backed copy of An Experiment in Love (1995) literally on my bookshelves. I remembered nothing about it although I must have bought and read it 26 years ago. It’s a signed copy and if I met Hilary Mantel then I’m afraid I have no memory of that either. But I was curious to read this pre-Wolf Hall novel now and to discover how I reacted to it.

The answer is – with pleasure, admiration and recognition. It is 1971.  Three young women leave home in the North to take up places at London University. They know each other from school and all go to live in the same female hall of residence. Mantel is my generation and I can confirm that her account of this period is so accurate you can reach out and touch it. My college days were spent in a city outside London but I remember the late keys, the sitting in each others rooms drinking tea or eating toast made in the hostel kitchen, smuggling boyfriends in (they are meant to leave at 11pm), trying to get some work done, longing for letters from home – and all the rest of it. Some students are very religious, some are dull, some are apparently ultra-sophisticated, Backgrounds vary enormously too. Some students come from comfortable homes with generous allowances. Others don’t. And then someone gets pregnant. Yes, yes, yes that’s exactly how it was although at my college there was plenty to eat and I don’t think we’d ever heard of anorexia.

Mantel’s narrator, Carmel, is a bright law student from a low income home with a difficult mother. She’s struggling for money (making the grant go round – remember those?) and eats less and less. Karina, the friend with whom she has a love/hate relationship remains chubbier than ever. Then there’s Julianne. Carmel’s roommate and a medical student.

In many ways this novel is a very readable fictional snapshot in time – without much overall structure although there’s a defining incident (in well worn literary tradition) at the end which dramatically sorts out a few people, attitudes and decisions. And the writing is masterly – although don’t expect anything remotely like Wolf Hall.

How on earth I managed completely to forget this compelling novel, I don’t know. It’s under my skin now and I shall remember it this time. 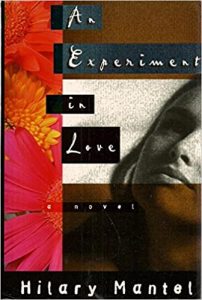