Susan’s Bookshelves: A Farewell to Arms by Ernest Hemingway

I’ve read A Farewell to Arms only once before many decades ago.  So I had forgotten most of the details although, of course, the unforgettable ending had stayed with me.  Even after a fascinating visit, a few years back, to Hemingway’s house at Oak Park village, now a Chicago suburb, when I reread some of his other novels and stories, I didn’t get round to A Farewell to Arms. Time now to put that right.

First published in 1929, it’s a simple enough story. Frederic Henry is an Italian speaking American serving as an officer in the Italian army against Austria and Germany during the First World War. He falls in love with an English nurse, Catherine, and she with him. Eventually he deserts the army and they escape together to neutral Switzerland where she dies in childbirth. Sorry, it’s hard to avoid the spoiler in this context. The title is a play on words – it connotes both the narrator’s desertion and his loss of Catherine’s loving arms.

Hemingway, who drove ambulances on the Italian front and was badly injured,  is very good at the futility of war, the casual deaths, the camaraderie, the anguish and the squalor of it all both mentally and physically. His characters are often sardonic because how else do you cope? There are also memorably tense accounts of both escapes – his from the army by stowing away on a train and then together as he rows them up the lake through a long night across the border into the safety of Switzerland.

The peaceful, harmonious life the two of them share for a few months in Switzerland, is very moving too. Even for a first time reader Hemingway evokes a wistful sense of this being a short idyllic interlude which will not, and cannot, lead to the long future of married bliss they hope for.

Hemingway is famous – and often cited by teachers of creative writing courses – for his short sentences with a single subject and verb. Yes, he does that a lot: “The Mayor got up from the telephone” “The baby was dead”. It’s forceful, incisive and powerful. But, actually, if you look closely, what Hemingway does more often is to use compound rather than complex sentences. He hooks verbs together with conjunctions but uses subordinate clauses very sparingly. Thus we get: “I went to the window and looked out” or “We talked and after the coffee we all went out into the hall” and that’s very effective too because it’s so direct.

I don’t want to labour it but his style really is very distinctive. The opening of this paragraph makes the point better than I can, I think:

“The waiter brought a dish of sauerkraut with a slice of ham over the top and a sausage buried in the wine-soaked cabbage. I ate it and drank the beer. I was very hungry. I watched the people at the table in the café. At one table they were playing cards. Two men at the table next me were talking and smoking. The café was full of smoke …”

This is page 244  in a 256-page novel. Henry is now desperately worried about Catherine who is in a long, protracted labour at the hospital and Hemingway really packs the anxiety into that terse writing.

Next week on Susan’s Bookshelves: The Machine Gunners by Robert  Westall 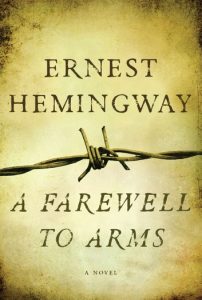