I first read Fingersmith first in 2002, curious because it had been shortlisted for both Booker and Orange prizes. I remember vividly gasping aloud when I reached one of the best plot twists I have ever read – on pages 173 to 175, about a quarter of the way in to this brick of a novel. A week or two later my husband was reading it. I watched his reaction when he reached the same point. He too, visibly jumped and said “Oh!” aloud.

Well of course, when you re-read it seventeen years later you know the twist is coming but it’s still just as compelling. I found myself reading agitatedly, wanting to pull the characters off the page and shout “No, no – don’t go there! ” It’s intensely powerful story telling.

It’s not easy to summarise the plot without giving too much away  Let’s just say that it’s the story of two young women from very different backgrounds in mid Victorian Britain, who are confronted by a colourful band of beautifully drawn characters some of whom have a bit of moral grit but most don’t.

It’s clearly meant to be a 21st century riposte to 19th century blockbuster novels and other fiction. Hardly a page goes by when Waters doesn’t deliberately remind you of something else: Middlemarch (Mr Casaubon), The Woman in White (lookalikes and madhouse), Oliver Twist (thievery), Jane Eyre (mysterious attics), Mary Barton (illegitimacy)  HMS Pinafore (baby farming) and so on. The result is an intelligent, glorious melange and a magnificent page turner – I sat up until 2.00am to finish the reread even though I already knew how it ended.

And there’s another dimension. Whatever Queen Victoria may have thought about it, Waters, who is gay herself, is very interested in the experience of gay women in the past. She argues that they were always there, obviously, but are hidden from view in most fiction and historical accounts. She explores this in all her novels – bringing such women into the foreground. Fingersmith is no exception. There’s an unlikely, unexpected love story at the heart although that’s not the main plot driver.

The other unforgettable section of this novel are the “madhouse” scenes which are utterly horrifying. You read them hoping desperately that Waters has exaggerated the ghastly, condoned cruelty for dramatic purposes, only to reach her end notes and see the acknowledgement to Marcia Hamilcar’s book Legally Dead: Experiences During Seven Weeks’ Detention in a Private Asylum (London 1910). Then you realise what the reality of a 19th century “madhouse” was and recognise just how humane was Charlotte Bronte’s Mr Rochester who refused to put his wife in one.

Fingersmith was televised – fairly decently for BBC in 2005 – with a cast including David Troughton, Imelda Staunton and Sally Hawkins but of course, as always, the book is incomparably better. 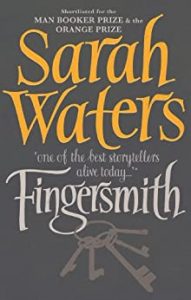