OK, let’s get it out of the way. Kipling was an imperialist. He was also a fine story teller and poet. I am firmly convinced that you have to separate the creator from the art. I don’t refuse to listen to Wagner because he inspired the Nazis or to Gesualdo’s madrigals because he killed his wife. Neither do I reject the beauty of Eric Gill’s art (over the door at Broadcasting House, for instance) because of the sculptor’s appalling abuse of his daughters.

Many people – nurtured on what it is arguably the best animated film Disney has ever made, immortalised by George Bruns’s wonderful score and songs by Terry Gilkyson and the Sherman brothers – don’t realise that The Jungle Book (1894) is a collection of short stories (and seven related poems). The first three stories are about Mowgli and the other four are about something else.

“Rikki-Tikki-Tavi”, for instance, is the powerful story of a mongoose who protects the (colonial) family, whose garden he lives in, from the malevolence of a pair of cobras. It’s colourful, exciting and rhythmic. Amazingly, considering how distant it was from every day experience in Kent,  it was one of the best read-aloud stories I ever found in 36 years of teaching English. Classes would tell each other about it and arrive at the lesson begging me to read to them “that story you read to 2M the other day”. Yes, Kipling knew how to tell a good story. “The White Seal” is a compelling tale, set in the Pacific.  Sadly “Toomai of the Elephants” focuses too much on beating animals into submission for my 21st century sensibilities and “Servants of the Queen” is a very strange story about hierarchy – including, and among, animals – in the British army in India.

Well, I hadn’t opened The Jungle Book for some years until now and am amused to discover that the battered old copy which has been around for as long as I can remember (was it my father’s?) is dated 1895 and illustrated by Kipling’s only son John who died in WW1 and two others.  The Mowgli stories were plundered by Robert Baden Powell, with permission from his friend Rudyard Kipling, for the nomenclature for his junior scout movement in 1916 – hence “cubs”, “Akela”, “the grand howl” and so on although a lot of that has been toned down in the UK in recent years. In many ways those stories, courtesy of both Baden Powell and Disney (whose interpretation was … err … loose) have bedded down to become an established part of our culture whatever we think about Kipling’s imperialism.

So how do they read now? Well, the use of a clumsy form of 16th century English (“Art thou hurt”?) to denote a language which is not English whether spoken by animals or humans, seems unbearably twee now. I hope newer editions, now that Kipling is long out of copyright, edit this out. The anthropomorphism sometimes grates too because it’s inconsistent. Yes, animals care for their young, hunt to eat and so on but they don’t conduct carefully orchestrated vendettas, lay plans or strike bargains. And the idea of Shere Khan, the tiger, being the baddie simply because he’s at the top of the food chain doesn’t sit right in 2021. He ends up skinned too which is positively repugnant in an age when thinking people are doing all they can to protect tigers.

And yet …Kipling keeps you turning the pages. You have to know what happens because he makes you care.  His characters have dignity – and that’s very welcome, however unfashionable it is. The stories also celebrate qualities like loyalty and friendship. Occasionally his arresting use of language leaps joyfully off the page: Bagheera hurrying at a “panther-canter” or someone waking to “blinding warm rain” for example.   Moreover in a story like “Rikki-Tikki-Tavi” there’s a thriller element, carefully psyched up by a man who knew exactly what he was doing.

Yes, The Jungle Book is worth a reread as long as you make allowances for a totally different culture – historical, social and political. 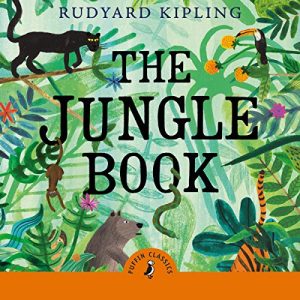 Next week on Susan’s Bookshelves: Fingersmith by Sarah Waters