Susan’s Bookshelves: The Man Who Died Twice by Richard Osman

Of course I’m well aware that Richard Osman’s books don’t exactly need a plug from me. They are worldwide, record breaking best sellers but they’re such glorious, laugh-aloud fun that I can’t resist sharing my pleasure with you just in case you’ve missed them. Anyway, I vowed to keep Susan’s Bookshelves as varied as I can and The Man Who Died Twice is a long, long way from Wuthering Heights, Death of Grass and sagas by RF Delderfield.

I don’t incidentally care for Richard Osman’s TV stuff – Pointless is exactly that and I can’t be bothered with it. But he writes beautifully with powers of observation that really do compare with the Great Novelists, past and present.

In a world of the Famous Five meets Miss Marple for the 21st century we’re in retirement complex in rural Kent. Elizabeth, sharp as a needle, is ex M15. Joyce is a perceptive former nurse who pretends to be mumsy when it suits her. Ibrahim is a gentle, cerebral retired psychiatrist and Ron has been a banner waving protestor. They’re a hilariously unlikely quartet of close friends as they embark feistily on elderly murder-solving  skulduggery which enables them to collaborate with Chris and Donna at the police station and requires the help of their Polish mate Bogdan who plays chess with Elizabeth’s dementia-smitten husband, Stephen, and does the group’s dirty (ish) work. This is the second book in the series so the situation is already set up.

In The Man Who Died Twice a stranger (except that he’s not) comes to live in the complex and a new train of espionage-linked events is triggered. Osman’s plots, of course, are totally, deliberately, laughable implausible. It’s the characterisation which is so perfect. I love every one of these beautifully drawn people. I would be happy to be friends with any or all of them.  And there a lot of running jokes. Part of the narrative is a first person account by Joyce and she’s struggling with Instagram. Ron’s eight year old grandson, Kendrick, who comes to stay is good value.  Not that any of this is sentimental. Of course people die in this complex. Ambulances are a common sight. Stephen’s early stage dementia is respectfully convincing. And when Ibrahim borrows Ron’s car and drives himself into town he is brutally mugged for his phone. Part of the plot involves bringing Ibrahim’s attacker to justice. And it isn’t the police who make that happen.

Do read The Thursday Murder Club and then The Man Who Died Twice. I defy you not to sigh in recognition – you know these people – and to chuckle a lot. The good news is that there’s a third title coming next year. 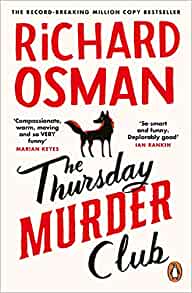 Next week on Susan’s Bookshelves: Silas Marner by George Eliot