AS Byatt writes in colour. There’s a vibrant pre-Raphelite quality about her prose in these stories which instantly reminded me of her wonderful 1990, Booker prize-winning novel Possession which features the life and work of a Victorian poet modelled on Christina Rossetti. In ‘A Stone Woman’, for example, we read of “the first glacial tongues pouring down into the plains, white and shining above the green marshes and under the blue sky.” Byatt is, among things, an art historian and that knowledge shines through on every page. And ‘Precipice-Encurled’ is a fictional study of a specific painting.

A well-known books website describes this volume as “gothic fiction” but that’s inaptly reductive. As David Mitchell points out in his excellent introduction, you cannot pigeon-hole these eighteen stories. AS Byatt simply doesn’t do genre. The longest story in this collection, for instance – almost a novella – is ‘The Djinn in the Nightingale’s Eye’. It nips through fairy tale, travel writing and explores the very nature of story telling because its central character is a professional narratologist – who meets a Djinn in a hotel bathroom. So does ‘Raw Material’ which is about a teacher of creative writing who, at last discovers talent, in his group in an unlikely format. Then he visits the writer’s home and suddenly we’re in a shocking Henry Jamesian world.

‘The July Ghost’ is a story about a dead  child who haunts a garden. “There is no boy” declares his mother fiercely at one point. I once heard Byatt talking about this on the radio and of course it’s a fictional exploration of grief with an autobiographical undertow. Byatt’s own son died in a road accident when he was 11. ‘Racine and the Tablecloth’ is rooted in Byatt’s unhappy boarding school past and ‘Sugar’ clearly owes a lot to Byatt’s own parents. Daughter of QC and a Browning scholar, Byatt has written and talked quite a lot about her difficult mother – as has her sister, novelist Margaret Drabble.

I have read many of these stories before in the distant past when they were published in various collections but some are new to me because they were written more recently and first appeared in various publications. ‘The Narrow Jet’, for instance, was first published in Paris Review 173 Spring 2005 and ‘Sea Story’ in the Guardian 15 March, 2013. Medusa’s Ankles is a new collection published in 2021.

AS Byatt – surely one of our most accomplished authors – is now 85 and it is possible that her best lies behind her. But what a best that is! Later this year I shall re-read Possession a book I adored when I first read it (more than once) in the 1990s. 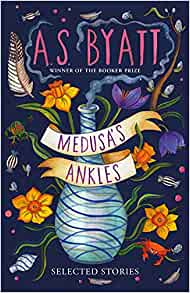 Next week on Susan’s Bookshelves: Tenderness by Alison Macleod.