Susan’s Bookshelves: The Mill on the Floss by George Eliot

Although I’ve read it at least twice in the distant past I have never taught The Mill on the Floss. Reading it again now with huge pleasure I’m struck by what a good novel it would be for an A Level group. It’s so full of themes, ideas and discussion that I’d need a great deal more than a single side of A4 to list them: parenting, siblings, education, disability, female inequality, duty, loyalty, forgiveness and much more. It’s a gloriously rich novel. It’s also – by 19th century standards – a pretty accessible read.

It was her third novel – after Adam Bede and before Silas Marner – and I’m certain that there are elements of Maggie Tulliver which are modelled on Eliot’s own memories of being a fearsomelty intelligent, curious, imaginative girl growing up in a man’s world. After all Mary Ann Evans knew she had to write under a male pseudonym in order to be taken seriously.

Maggie Tulliver is a mill owner’s daughter who adores her brother, Tom who is by turns affectionate and dictatorial. She is drawn to Philp Wakem, who has been left with a minor disability by an illness. Unfortunately there is a long term feud between Wakem senior, a lawyer, and Mr Tulliver. The result of this is that Mr Tulliver loses his mill and, with a faint whiff of Romeo and Juliet, Maggie is forbidden to see Philip.

Years pass, Tom eventually manages to get the mill back and Maggie meets Stephen who is courting her cousin Lucy. There is, however, chemistry between Maggie and Stephen which both try to deny because of what they see as commitments elsewhere. Of course there is no happy ending for anyone. Eliot ends the novel with a gloriously symbolic flood sweeping through the community and washing things/people away both physically and metaphysically.

I love the way Eliot uses Mrs Tulliver’s very judgemental sisters as a quasi Greek chorus dispensing advice, opinion and, occasionally help although that always comes with conditions and chilly patronage which reminds me of that dreadful line in Measure for Measure: “See that she has needful but not lavish means”.  Their husbands – especially Uncle Deane who gives Tom a job when Tulliver fortunes are at their lowest ebb – are rather more attractive. You really wouldn’t want to share a cup of tea with any of Maggie and Tom’s aunts – George Eliot at her acidic best. She’s also very good (you see it strikingly in Middlemarch eleven years later) at small town group dynamics and the way distorted gossip takes a hold on communities. 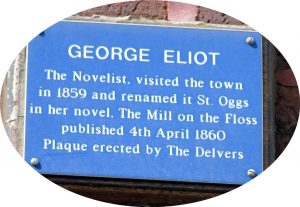 I was repeatedly astonished by how topical some aspects of The Mill on The Floss are too. Maggie, in a moment when her agonising self-control slips, agrees to go away with Stephen and marry him. That means they spend a night together on the river before reaching the town where Maggie’s conscience overpowers her and she insists on leaving him and going home. Of course the night together is, although full of passionate longing, sexually innocent but Maggie is castigated by the populace of St Ogg’s for immoral behaviour in a way that Stephen isn’t. 162 years after the novel was published that still rings true. Although today nobody (or almost nobody) minds much whether or not young people have sex together, women are still judged differently from men on socio-sexual issues.

The character I empathise with most is poor, “more sinned against than sinning” Mrs Tulliver. Her story is tragic. She has two challenging children. She’s a fairly simple woman who can’t make head or tail of  Maggie’s mercurial intelligence and despairs of her sallowness and dark hair. Then she loses all her treasured possessions including her home and virtually has to go into service at the behest of her bossy sisters. Finally, long widowed,  she outlives both her children – an appalling fate for any mother. There’s scope here for a spin-off novel or play about Mrs Tulliver – anyone up for it?

Next week on Susan’s Bookshelves: The Corfe Castle Murders by Rachel McLean